Los Angeles Man Is Reunited With Heirloom Engagement Ring in an Unlikely Twist of Fate January 30, 2018

A Los Angeles man is thanking an honest neighbor, a road not taken and divine intervention for the return of an heirloom engagement ring that went missing during a crosstown move. In the span of just two hours, Nico Bellamy's emotions would run the gamut from sheer desperation to unbridled elation. 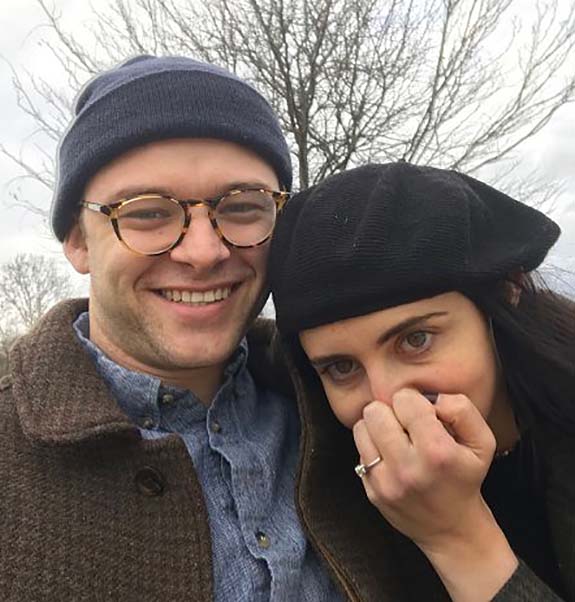 First, a little background on Bellamy, his girlfriend, Caitie Schlisserman, and the ring.

For three years, Bellamy was the custodian of a very special piece of jewelry that had been entrusted to him by Catie's dad, Stuart. It was the diamond engagement ring once worn and cherished by Catie's grandmother. The ring, which features a large round center stone and tapered baguette side stones, would remain in a safe deposit box at the bank until Bellamy was ready to pop the question.

This past summer, as the couple prepared to move into a new home together, Bellamy realized that the engagement was imminent and pulled the ring from the safe deposit box. He put the ring in a plastic bag and then in a box. The box would travel to the new home across town in Bellamy's backpack.

The backpack ended up on the floor in the living room and there it remained — forgotten for about a week.

Then, with Catie's dad set to arrive at the local airport, Bellamy went to check on the ring. To his horror, the backpack was unzipped and the ring was gone. Bellamy suspected that someone from the moving company may have taken it.

Bellamy got a sick feeling in his stomach and wasn't sure how he was going to tell Catie's dad the bad news. Catie could sense that something was wrong, but Bellamy couldn't tell her. To make matters worse, Catie's grandmother had passed away only nine months earlier.

Bellamy feared the worse. Although he had a great relationship with Stuart, he wasn't sure how the dad would react.

“To his credit, he’s a very, very kind person, but I’ve never been in a situation like this," Bellamy told People magazine. "So I took my glasses off in case I was going to get hit! I was panicking.”

The level-headed dad told Bellamy that they'd “figure it out.”

Driving back to the new home with Stuart and Catie in the car, Bellamy decided to beat the traffic by taking a new route. By chance, as they entered the neighborhood via this "road not taken," Stuart spotted a sign posted to a tree that read, “Engagement Ring Found.”

Once they arrived at the house, Bellamy made an excuse to rush back out, saying he had to walk the dog. Actually, he zoomed back to the sign. He contacted the family that posted the sign and described the ring he had lost. It was a perfect match.

Bellamy had his ring back within an hour. Apparently, the family had found the ring box in a nearby alleyway— close to where the moving trucks were a week earlier. Bellamy believes the movers took the box, but threw it away when they failed to notice that the crumpled plastic within it was hiding a priceless keepsake.

“I didn’t even know the ring was missing until that morning," Bellamy told People. "This all happened in the span of like two hours. I found out the ring had been stolen, I drove to pick up her dad and told him about it. The movers had to have seen it and thrown it away. Then my neighbors found it and almost threw it away, and then kept it. Then they put up this one sign, and it was the only sign they put up, on a street that I never go on.”

Bellamy proposed to Catie on New Year's Eve using Catie's grandmother's ring. At that time, he was finally able to tell her of the crazy twist of fate that returned the ring to their family.

The couple wonders if the happy ending was the work of her grandmother helping the family out.