If Patriots Capture Their Sixth Super Bowl on Sunday, Expect the Championship Rings to Be Huge January 31, 2018

If quarterback Tom Brady and the New England Patriots win their sixth Super Bowl this Sunday at U.S. Bank Stadium in Minneapolis, Minn., expect their championship rings to be the biggest ever — and we mean BIG. 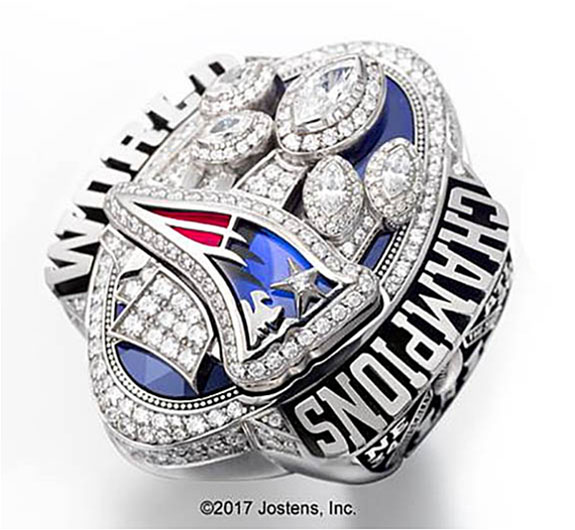 The National Football League, you see, maintains an unwritten rule that allows teams with multiple Super Bowl victories to design the most extravagant rings. The more Vince Lombardi Trophies, the bigger the ring.

In June 2017, the Patriots commemorated their fifth championship and greatest comeback in Super Bowl history with monumental rings gleaming with 283 diamonds weighing 5.1 carats.

At the time, team owner Robert Kraft said, “It was a historic comeback win and the players deserve to have a ring that represents that accomplishment. So, we created the biggest Super Bowl ring ever made." 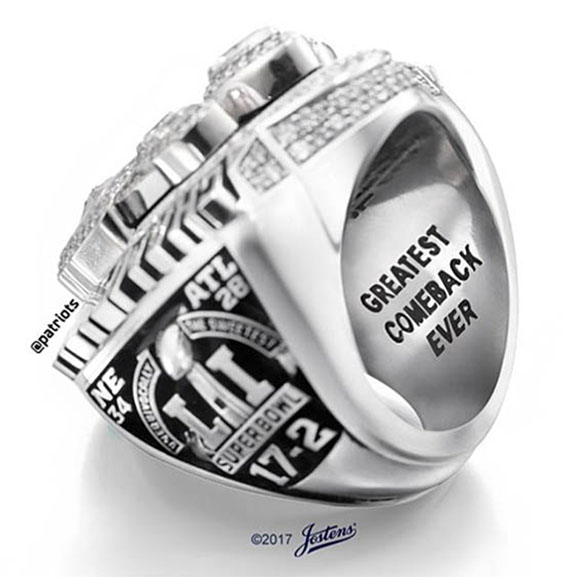 The 283 diamonds were a nod to the score of 28-3, the seemingly unsurmountable deficit the Patriots faced before going on to tally 31 unanswered points in their triumph over the Atlanta Falcons.

Ring manufacturer Jostens didn’t officially announce the gram weight of the 2017 nor the 2015 Super Bowl rings, but they were much larger than the Patriots’ 2004 rings, which reportedly weighed 110 grams (just under one-quarter pound).

Jostens documented the evolution of the Patriots' championship rings in this amazing photo.

If the Philadelphia Eagles prevail on Sunday, it will be their first Super Bowl victory. We expect their championship rings will be similar in size to the one earned by the first-time Lombardi Trophy winner Seattle Seahawks in 2014. Those rings weighed in at a modest 56 grams, one of the smallest in recent Super Bowl history.

The NFL typically awards 150 rings to the Super Bowl victor and allocates approximately $7,000 per ring — although teams with multiple Super Bowl victories are allotted a higher budget for diamonds. Teams often create “B” and “C” level rings — designs with faux diamonds or fewer diamonds — for distribution to the front office staff. The rings are usually presented to the players some time in June.

The cost of the Patriots' rings have far exceeded the norm. In 2015, Business Insider reported that the Patriots' Super Bowl XLIX rings were worth $36,500 apiece.

If the favored Patriots win Super Bowl 52, they will tie the Pittsburgh Steelers for the most Super Bowl victories at six. The Dallas Cowboys and the San Francisco 49ers each have won five.

Credits: Images by Jostens via patriots.com.