This 10-Carat Gem-Quality Amethyst Was Mined by Hand in Four Peaks, Arizona February 1, 2018

While most gem-quality amethyst is currently mined in Brazil and Uruguay, this beautiful 10-carat specimen is American through and through. It was discovered eight years ago in the off-the-grid amethyst hotspot of Four Peaks, Ariz., but now calls the Smithsonian in Washington, D.C., its home. 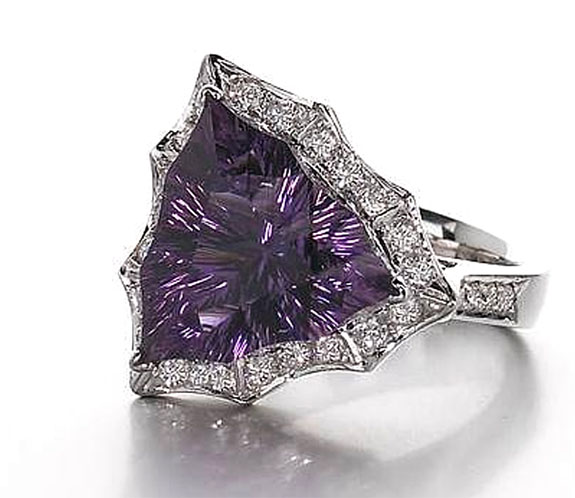 A superior example of February's official birthstone, the concave trillion-cut amethyst was mined and faceted by Darryl Alexander in 2010. It was made into a ring by designer Brenda Smith, whose 18-karat white gold mounting mimics the scalloped outline of the gem. Smith generously donated the ring to the Smithsonian in 2014.

The Smithsonian describes the amethyst as having a deep violet color with flashes of red, a trait common for a Four Peaks amethyst.

The Four Peaks Amethyst Mine is believed to be the only precious stone mine in the United States that requires a helicopter to transport supplies in and take mined material out. Located in the most rugged parts of the Matzanal Mountains, 46 miles from Phoenix, the miners live at the mine for up to two weeks at a time, and have to hike nine miles roundtrip to get to work. According to the mine's official website, the facility has no running water or electricity, and hand tools must be used for the slow, tedious extraction of the amethyst. Private tours, which include a high-altitude helicopter ride, are available.

Amethyst is the most valuable gem variety of quartz. In its pure state, quartz is colorless. But when trace amounts of other atoms get into the mix, a range of colors can occur. For instance, iron atoms are credited with giving amethyst a wide range of color intensity, from almost white to deep purple.

The color rating of an amethyst is determined by a combination of hue, tone and saturation. Hue is the color; tone is relative lightness or darkness of the color; and saturation relates to the color’s intensity, from dull to vivid.

Amethyst has been coveted for thousands of years and is one of the oldest recorded gemstones. They’ve been recovered from ancient Egyptian tombs and were prized by the Greeks, Romans, Babylonians and Hebrews. Amethyst is associated with spirituality, sobriety, security and wisdom. It is also the zodiac stone for the constellation of Pisces.

According to Roman mythology, amethyst was colored purple by the god of wine and was thought to offer protection against drunkenness. It derives its name from a Greek word meaning “not to intoxicate.”

Beyond the U.S., Brazil and Uruguay, amethyst can be found in parts of Zambia, Mexico, Italy, Germany and Canada.