What could be more disheartening than having a surprise marriage proposal scuttled by airport security during a routine bag search? Acting on this problem, a romance-minded airport in the UK has devised a special way for a suitor to slip the ring through security without alerting his soon-to-be fiancée. 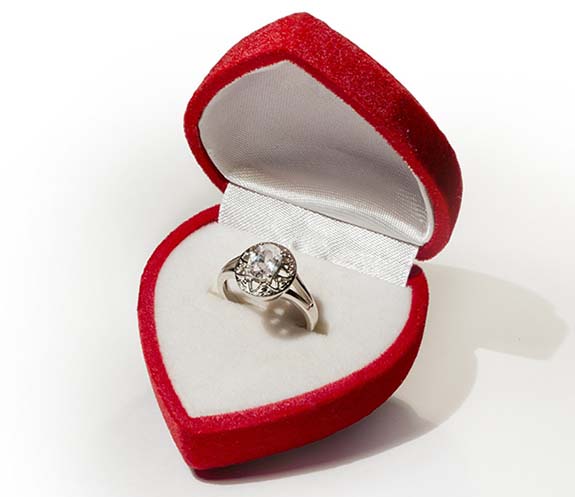 “It would put a big damper on someone’s meticulously planned romantic trip if their big surprise was revealed even before they’ve boarded the plane," noted East Midlands Airport’s head of security, Matthew Quinney. "Arguably, there are more romantic places to be proposed to than in our security hall."

Out of courtesy to those who have been planning this moment for weeks or months, the airport has put in measures to ensure its security procedures are not the cause of a failed marriage proposal.

During the week of February 12 — to align with romantic Valentine's Day getaways — the East Midlands Airport will offer up a "secret code" to those who plan to pop the question during their trip. Valentine's Day is the second-most-popular day of the year to get engaged, according to WeddingWire.com. Christmas Day ranks first.

To obtain the code, the suitor simply emails a request to love@eastmidlandsairport.com or sends a direct message via Twitter to @EMA_Airport. The suitor then receives a secret code that he will reveal to security staff at the airport. That code will alert the staff to divert the ring carrier to a separate lane from his partner, so that his bag search remains away from her view.

The airport has been promoting its innovative "secret code" via Facebook and Twitter. It is also encouraging social sharing using the hashtag #LoveIsInTheAirport.

East Midlands Airport, which is located in Leicestershire about 120 miles north of London, expects to handle 60,000 passengers during Valentine's Day week. The airport serves a number of romantic destinations, including Dublin, Belfast, Brussels, Malaga, Amsterdam and Gran Canaria.

It's still not clear if other international airports will take East Midlands' lead and offer their own "secret codes" during the year's most romantic travel periods.