The Houston Astros’ colorful 2021 American League Championship rings tell the story of the team's impressive run to the World Series, where they narrowly lost to the Atlanta Braves in six games. The 10-karat white and yellow gold rings feature 104 round diamonds, 15 custom-cut diamonds, four princess-cut diamonds, 42 blue sapphires and eight orange sapphires for a total gemstone carat weight of 7.10 carats. 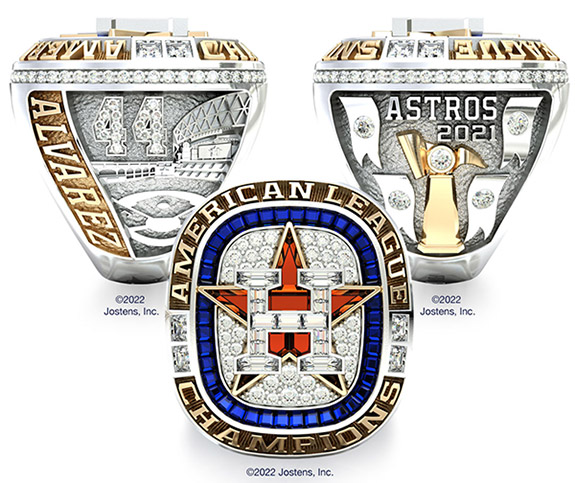 The Astros' players and coaches received their rings on Monday as they stood along the first base line at Minute Maid Park in an exciting ceremony prior to the team's 2022 home opener.

A beautiful design detail is the use of eight custom-cut orange sapphires to make up the star of the Houston Astros logo on the face of the ring. Rising above the orange star is the Houston "H" rendered in 15 intricately set custom-cut diamonds, symbolic of the Astros 15 franchise postseason appearances. The logo sits upon a background of 40 round pavé-set diamonds surrounded by a halo of 42 genuine blue sapphires.

Framing the logo in contrasting yellow gold — signifying the team’s 2021 American League Team Gold Glove award — are the words AMERICAN LEAGUE along the top and CHAMPIONS along the bottom. These words are accented with four princess-cut diamonds, two on each side of the ring face. These four diamonds represent the number of league pennants won throughout the franchise's history.

The ring's 104 round diamonds symbolize the 95 games won during the regular season and the team's nine post-season victories. The 60 diamonds accenting the perimeter of the ring top pay tribute to the Astros' 60th season in Major League Baseball.

The right side of the ring features the Astros wordmark logo accented with the championship year 2021. The American League Trophy in yellow gold stands out from the white gold background. A single diamond is set in the trophy, symbolizing the most recent American League championship won by the Astros. Four banners are set on either side of the trophy, each set with a single diamond representing the team's four trips to the World Series. These five total diamonds are representative of the Astros' current run of five consecutive ALCS appearances. 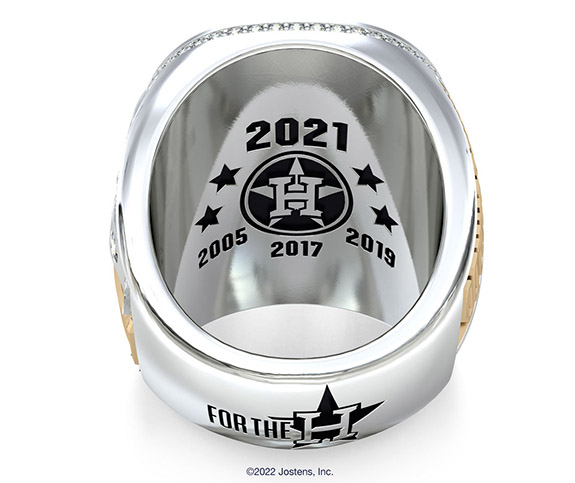 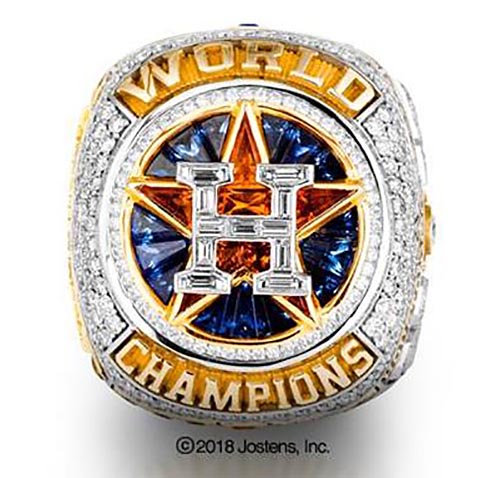 While the gemstone descriptions of the 2021 AL championship rings are impressive, they fall a bit short of the specs of the World Series rings awarded to the Astros on opening day 2018. Also designed by Jostens, those rings — the first World Series championship rings in franchise history — used 225 colorless diamonds, nine orange sapphires and 16 blue sapphires set in 14-karat white and yellow gold. Each ring weighed 90 grams and glittered with a total gem weight of 10.40 carats.