Singer-songwriter Avril Lavigne turned to Instagram recently to announce her engagement to fellow pop-punk rocker Mod Sun and to offer a peek at her new 5-carat, heart-shaped diamond ring. 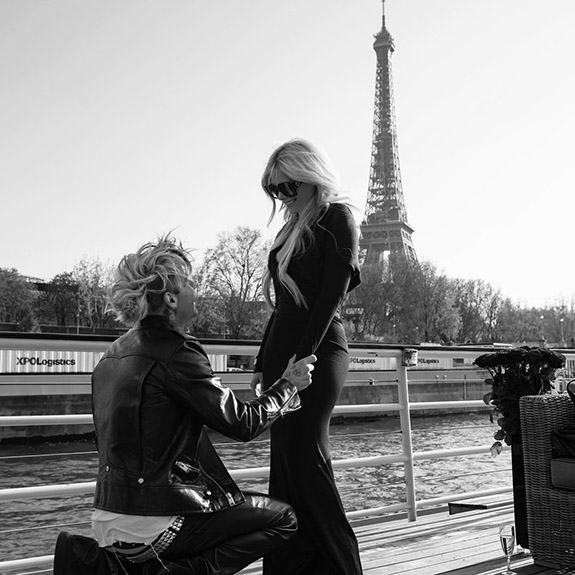 She treated her 10.8 million Instagram followers to a series of romantic proposal pics, some with a clear view of the Eiffel Tower in the background. She captioned the photos, "Oui! Je t’aime pour toujours Dimanche. 27. Mars. 2022," which means "Yes! I love you forever. Sunday, March 27, 2022." She punctuated the post with three emojis: a heart, a diamond ring and a pair of champagne glasses. 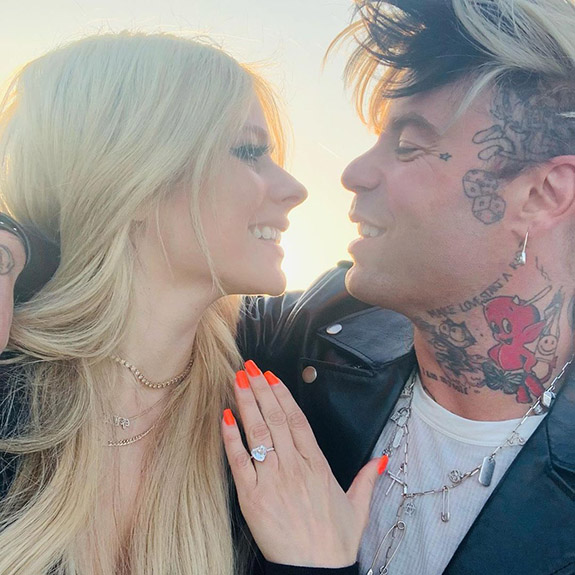 Sun, 35, chose to propose in Paris because Lavigne, 37, has always had a special affection for the city. He also chose a heart-shaped diamond because he literally wanted to give Lavigne his heart, according to the "My Happy Ending" singer's jewelry designer friend, Caryn Alpert of XIV Karats, Beverly Hills, CA. 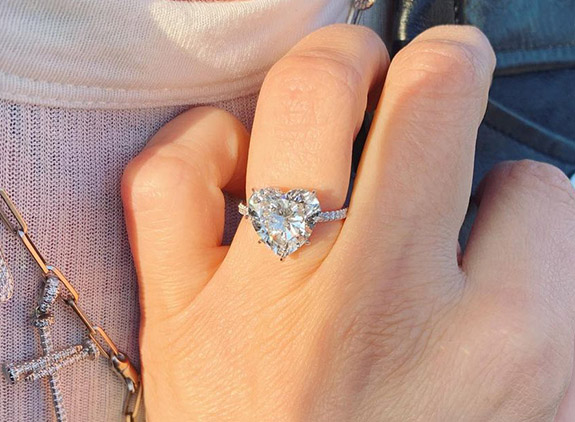 Alpert told EOnline.com that when the performers met for the first time, they were stunned to notice they were wearing identical heart-shaped, pavé-accented rings. What were the chances that they would prefer the same type of jewelry and wear it out on the same day? 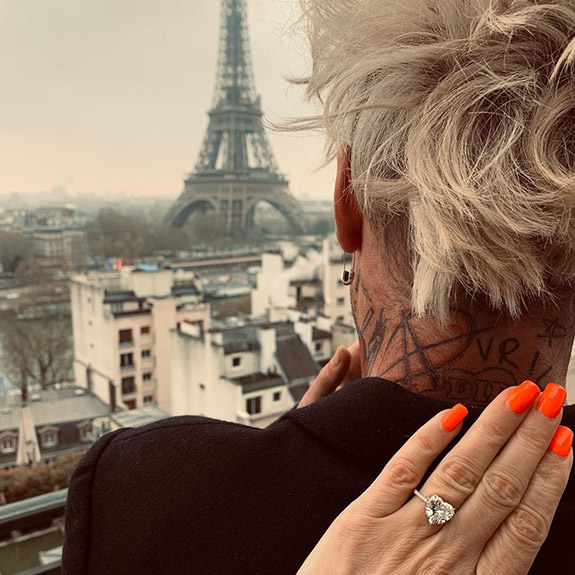 "They literally haven't taken them off since then," Alpert explained. "So when Mod came in, and he was ready to propose, it for sure had to be a heart because they have this whole heart connection thing."

Sun shared proposal photos on his Instagram page and captioned them with an eight-line poem:

The day we met I knew you were the one.
Together forever til our days are done.
I had a dream where I proposed in Paris.
I pulled out a ring + asked you to wear it.
I was on one knee as I looked in your eyes.
You’re too beautiful for my words to describe.
I grabbed your hand + took one last breath…
I said “will you marry me?” + she said “yes”.

At the end of the poem, he added the phrase, "I love you Avril" and punctuated it with a red heart emoji.

Alpert told PageSix.com that the 5-carat stone is accented by a French micropavé band that bears the words “Hi Icon," which were the first words Sun ever uttered to Lavigne. She also told Eonline.com that Sun had a crystal clear vision for the ring design.

"He really knew what he wanted," she said. "And we were able to find him a really beautiful selection and he just chose the biggest, prettiest one of all of them..."

Lavigne has been married two previous times. In 2006, she married pop-punk musician Deryck Whibley of the band Sum 41, but divorced in 2010.

In 2013, she married musician Chad Kroeger, frontman of Nickleback. In August of 2012, Kroeger had proposed to Lavigne with a vintage-style platinum engagement ring featuring a 10-carat pear-shaped center stone accented on each side with specially cut half-moon-shaped diamonds totaling an additional 4 carats. Their marriage ended in 2015.