Unlike Super Bowl rings that can be worth upwards of $35,000 apiece, college football's National Championship rings cannot exceed $415 in value, according to NCAA rules. 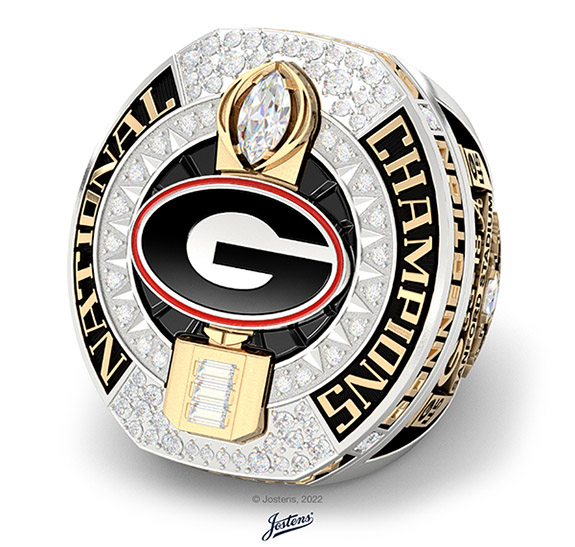 This reality creates enormous challenges for companies, such as Jostens, which was recently tasked with creating commemorative jewelry for the University of Georgia Bulldogs' National Championship football team. Instead of using diamonds and other precious gems in the design, Jostens used simulated stones. Fourteen-karat gold was replaced by less precious alloys.

Despite the necessary cost-cutting, the Bulldogs' National Championship rings still pack a punch with artful details and symbolic storytelling of a season that culminated in a 33-18 win against the #1-rated Alabama Crimson Tide. January's exciting title game drew 22.6 million viewers on ESPN.

On Saturday, the rings were presented to non-returning seniors at the Bulldogs' G-Day intrasquad game and then privately to the remaining players and coaches at a reception on Monday.

“It’s beautiful,” former Georgia nose guard Jordan Davis told ESPN2 viewers during the G-Day coverage. “We designed it ourselves, the seniors. We knew what we were getting into. It’s even beautiful in person. It looks a lot different than the mockups. We love it. This is our baby right here. We treasure this.”

The ring top features the Georgia “G” logo boldly placed atop the coveted CFP Trophy, which is set with a marquise-cut (football-shaped) stone, symbolic of the 2021 National Championship and the team's first in the CFP (College Football Playoff) era, which began in 2014. The Bulldogs' previous national championship was way back in 1980.

Set between the spikes are 20 round stones, paying homage to the 20 unanswered points scored in the fourth quarter, leading the University of Georgia to victory.

An additional 45 stones are set on the ring top, collectively representing the 45 wins of the senior class, with the words NATIONAL CHAMPIONS accenting the left and right side of the ring top. Completing the ring top are four additional stones and the team’s core characteristics: RESILIENCY, TOUGHNESS, COMPOSURE and CONNECTION. 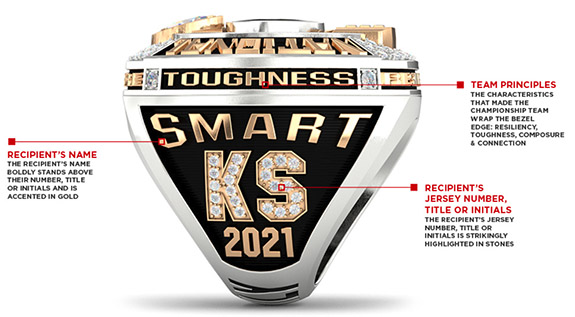 The left side of the ring proudly displays the recipient’s name in raised gold lettering above the jersey number, title or initials, which are hand-set with colorless stones. The left-side design also includes the 2021 championship year at the bottom. 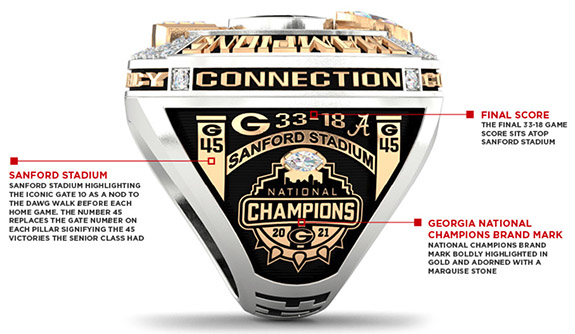 The right side of the ring adds specific details about the 2021 season. The final championship game score of 33-18 is highlighted above gate 10 of Sanford Stadium, the location of the Dawg Walk, which takes place before each home game.

Replacing the gate number on the pillars of the stadium is the number 45, a nod to the 45 total wins of the senior class. The right side is completed with the official Georgia Football National Championship logo, which is accented with a single marquise-cut stone. 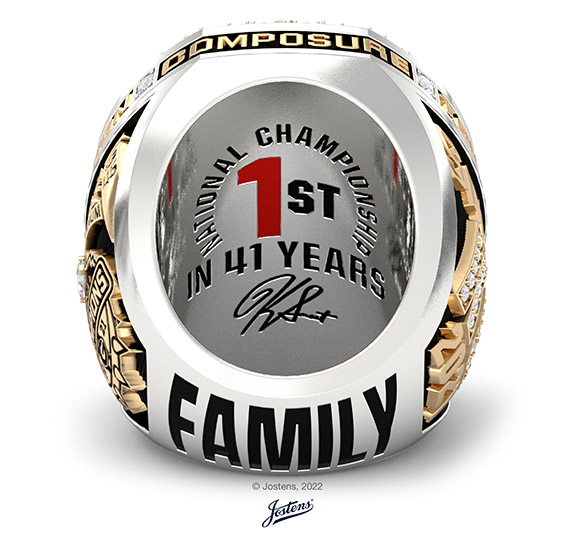 The interior of the ring pays tribute to Georgia’s first national championship in 41 years with a custom logo and the "1" rendered in Bulldog red. As an added touch of personalization, the recipient's signature is engraved on the inside of the ring. The team’s motto, FAMILY, is featured on the outside palm.