Jeremejevite Is So Rare That Few Professional Jewelers Will Ever Encounter One February 16, 2022

Imagine a gemstone so rare that few professional jewelers will ever encounter one. Such is the case with the beautiful, yet elusive, blue jeremejevite. This oval-cut specimen — which weighs 11.3 carats and was sourced in the remote Erongo Mountains of Namibia — has been part of the Smithsonian's National Gem Collection since 2012. 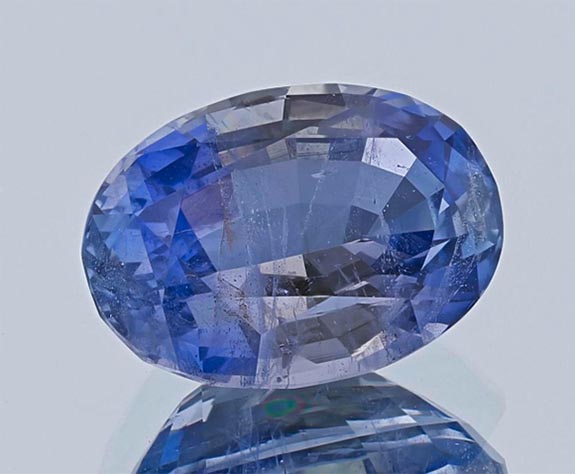 A colorless version of jeremejevite was first identified in 1883 on Mt. Soktuj in the Adun-Chilon Mountains of Siberia, Russia. The unique aluminum borate mineral was named after Russian mineralogist and crystallographer, Pavel Vladimirovich Eremeev (Jeremejev, in German).

When a second occurrence of jeremejevite was found in Namibia 90 years later, local prospectors misidentified the deep blue crystals as aquamarine. Since then, small amounts of jeremejevite have turned up in Tajikistan, Germany, Madagascar and Burma.

The crystals are most often tiny in size and range in hue from colorless and pale yellow to blue, blue-green and lavender. The Smithsonian specimen is considered a valuable collector's gem due to its large size and rich color. It was purchased for the Smithsonian with funds from the Tiffany & Co. Foundation.

The fine-quality jeremejevite available on the market today was likely sourced from a recently discovered pocket in Namibia. When it comes to faceted blue jeremejevite, "impressive size" means anything larger than 1 carat, according to yavorskyy.com. The international gem specialist added that it is curious how many rough jeremejevite display bicolor zoning: light yellowish on the top and distinct blue on the bottom.

Jeremejevite is a member of an exclusive club of hard-to-say, hard-to-source gemstones that include taaffeite, grandidierite, serendibite, musgravite, benitoite and poudretteite (which we profiled in August 2021).

Jeremejevite generally forms as hexagonal crystals embedded in granitic pegmatite, which is a coarse igneous rock that forms during the final stage of a magma's crystallization. The gem has a hardness of 6.5 to 7.5 on the Mohs scale.