The coins pay tribute to the Vienna Philharmonic and were designed by the Austrian Mint. The 10-foot-tall golden tree stands on a base that looks like Vienna's Golden Hall of the Wiener Musikverein, regarded as the crown jewel among the world's concert halls.

The obverse of the coin depicts the pipe organ in the Golden Hall and the reverse shows instruments of the Vienna Philharmonic, including a Vienna horn, bassoon, harp and four violins centered on a cello.

The 20-ounce tree-topping coin, sometimes referred to as "Big Phil," was originally issued in 2009 to commemorate the 20th anniversary of the Vienna Philharmonic coin. 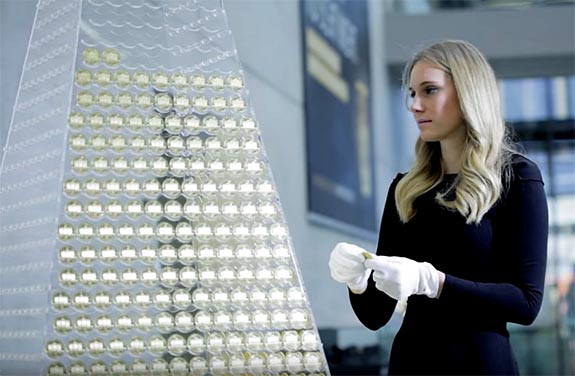 A video posted on YouTube by Pro Aurum shows staffers prepping the tree by slotting the gold coins by hand into the acrylic pyramid, a tedious process that took more than an hour to complete.

Displayed under heavy security in the lobby of Pro Aurum's Goldhaus, the tree will be on display through Saturday, December 15.