Weighing 10,363 carats, the "Dom Pedro" is the largest faceted aquamarine in the world and the masterwork of Bernd Munsteiner, an Idar-Oberstein-based gem cutter, who has been called “The Picasso of Gems” and “The Father of the Fantasy Cut.” 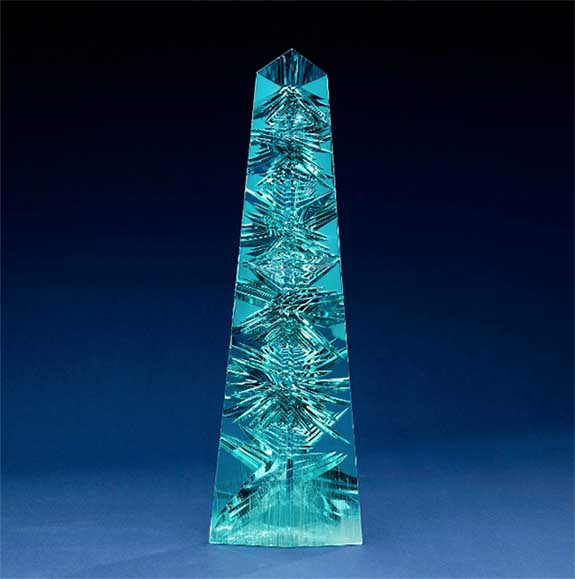 Standing nearly 14 inches tall, the obelisk-shaped Dom Pedro is, arguably, the most beautiful example of March’s official birthstone and one of the few objects in the world that can hold its own in a display case just 30 feet from the Hope Diamond at the Janet Annenberg Hooker Hall of Geology in Washington, D.C.

Back in 1992, when Munsteiner viewed the gem for the first time, “it was love a first sight!” according to an account at Smithsonian.com, and transforming the rough crystal into the Dom Pedro would become the “project of his life.” 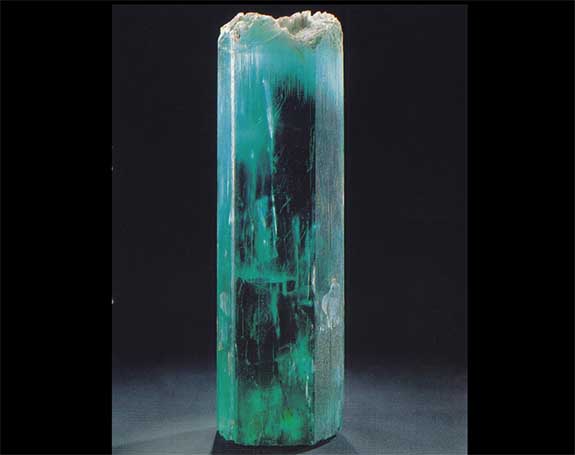 Munsteiner spent four months studying a massive 57-pound rough aquamarine crystal before embarking on a grueling six-month adventure to meticulously cut, facet and polish the stone. Munsteiner is famous for his “fantasy cuts,” where he facets a pattern of “negative cuts” into the back of a gem, which reflects the light from within. The finished work weighs 4.57 pounds.

Named after Brazil’s first two emperors, Dom Pedro Primeiro and his son, Dom Pedro Segundo, the aquamarine was originally part of a much larger crystal that was discovered by three Brazilian prospectors — garimperos — in the state of Minas Gerais in the late 1980s. While being transported, the one-meter-long, 100-pound crystal fractured into three pieces. Two were eventually cut into smaller gemstones, but the largest piece had much greater potential. Its exquisite green-blue color and pristine clarity opened a window of opportunity for a cutter with the skill of Munsteiner.

While cutting the gem completely by hand, he was never concerned with the eventual carat weight. His attention was purely on the beauty and the brilliance. “When you focus on the carat weight, it’s only about the money,” he said. “I cannot create when I’m worried about the money.”

Unveiled at the annual gem fair in Basel, Switzerland, in 1993, the gem became a traveling ambassador for the German government, a tangible example of German craftsmanship and ingenuity.

But, by the late 1990s, the gem’s future was in jeopardy. The Brazilian consortium partner wanted the gem to be sold so he could recoup his investment. Gem collector Jane Mitchell and her husband Jeffery S. Bland stepped in to purchase the Dom Pedro in 1999, ensuring that it would remain intact and not sliced up into smaller stones.

The couple generously gifted the Dom Pedro aquamarine to the Smithsonian in 2011. It was made part of the permanent exhibition at the very end of 2012.

Aquamarine is the pretty soft blue variety of the mineral beryl. Other gems in the same family include green emerald, pink morganite and golden yellow heliodore.