A 5.69-carat fancy vivid blue diamond fetched $15.1 million at Sotheby's New York yesterday, making it the top lot of the day and advancing the narrative that aficionados are eager to pay top dollar for blue diamonds that carry the ultra-rare "fancy vivid" classification. 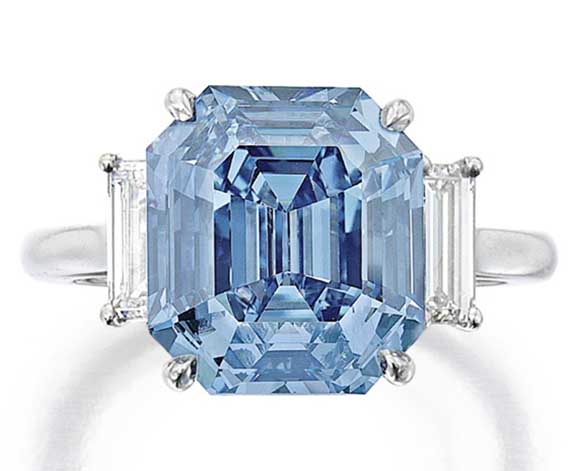 The hammer price, which is equivalent to $2.66 million per carat, came in slightly above the pre-sale high estimate of $15 million.

The emerald-cut gem, which is set in a platinum ring and flanked by two baguette-shaped diamonds, has a VVS1 clarity grade. The auction house pointed out that the stone — if recut — has the potential to be internally flawless.

"Fancy Vivid" is the ultimate color classification for blue diamonds. Those that display lower levels of color saturation may be rated "Fancy Intense," "Fancy," "Fancy Light" or "Light," according to the Gemological Institute of America. Blue diamonds owe their color to the presence of boron in the chemical makeup of the gem.

Back in May of this year, the “Oppenheimer Blue” — a 14.62-carat fancy vivid blue diamond — fetched an astounding $57.5 million at Christie’s Geneva. The Oppenheimer Blue’s per-carat price of $3.93 million came up just shy of the record of $4.03 million held by the 12.03-carat Blue Moon of Josephine, another magnificent blue diamond that sold for $48.5 million at Sotheby’s Geneva in November of 2015. 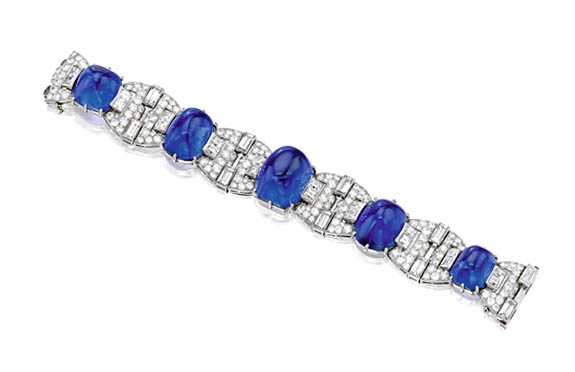 A second highlight of yesterday's Sotheby's auction was a sapphire-and-diamond bracelet by Van Cleef & Arpels. The piece carried a pre-sale estimate of $1 million to $1.5 million, but eventually yielded $3.16 million — more than double the high estimate. Designed circa 1935, the bracelet has five sugarloaf Ceylon cabochon sapphires weighing approximately 193.73 carats.

Among the disappointing lots were two that failed to meet Sotheby's reserve price and remained unsold. One was a 110.92-carat round diamond, which had been touted as the largest round diamond to be offered at auction. The diamond boasted a VS1 clarity, but an L color (faint brown). Another high-profile, unsold lot was a 5.24-carat, fancy intense orangy-pink diamond that was expected to sell in the range of $1.8 million to $2.2 million.