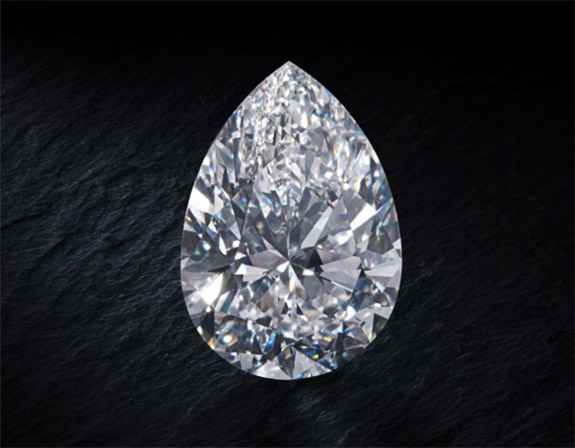 Designated as Lot 26, The Rock found a buyer within two minutes. Bidding started at 14 million Swiss francs and accelerated in increments of 500,000 until it hit 18 million Swiss francs. After three smaller bids, auctioneer Rahul Kadakia smashed the hammer down at 18.6 million. The final price, which fell in the lower range of the pre-sale estimate of 19 million to 30 million, included the buyer's premium.

About the size of a chicken egg, The Rock was accompanied by a letter from the Gemological Institute of America stating that it is the largest existing D-to-Z color, pear-shaped diamond ever graded by the laboratory. The GIA gave it a color grading of G and a clarity grading of VS1. 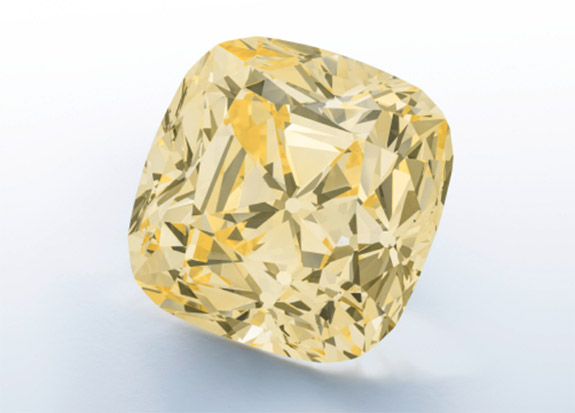 This was the third appearance of The Red Cross Diamond at Christie’s. In April of 1918, the stone was first offered for sale at Christie’s London by the Diamond Syndicate in aid of the British Red Cross Society and the Order of St John, whose symbol is the Maltese cross. A striking feature of the faceted gem is the eight-pointed Maltese Cross, which is clearly visible on the table facet of the diamond.

The cushion modified brilliant-cut diamond, which carries a color grade of fancy intense yellow and a clarity grade of VS2, was purchased by the famous London firm S.J. Phillips for a then-staggering £10,000 (approximately $786,000 today). Now 104 years later, the sale of the 205.07-carat canary yellow diamond will benefit the efforts of the International Committee of the Red Cross. 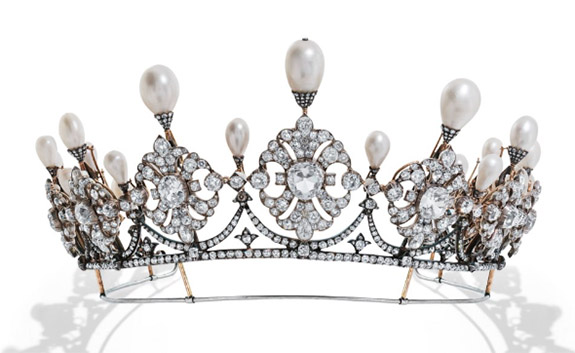 The most surprising performer of the evening was an exceptional 19th century natural pearl and diamond tiara once owned by the Fürstenbergs, one of the most important aristocratical families in the Habsburg Empire. The cleverly designed tiara was estimated to earn 400,000 to 600,000 Swiss francs. Instead, it fetched 2.39 million Swiss francs ($2.4 million), nearly four times the high estimate.

Designed by Gustav Flach in the late 1800s, the tiara could take on so many looks, depending on the elements that were added or subtracted from the original piece. By removing the diamond motives, the 23 natural pearls seemed to just hang among the hair. The wearer could remove the smaller pearls and leave the big ones, or remove all the pearls and wear the tiara with just the diamond motives. The pearls could be removed and replaced by other precious stones. What's more, each of the diamond motives could be linked together to create a necklace, or worn individually as a brooch or hair pin.