Welcome to Music Friday when we bring you great tunes with jewelry, gemstones or precious metals in the title or lyrics. Today, country star Jana Kramer sings about her first love and how she ended up with a class ring instead of bridal jewelry in her 2015 release, "I Got the Boy." 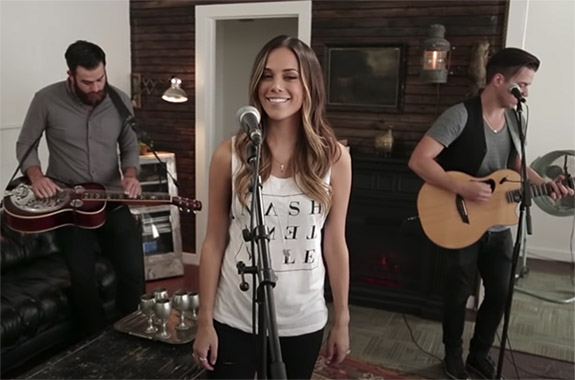 As the song opens, Kramer describes how she spotted honeymoon pics of her high school sweetheart in the pages of a local newspaper. She reminisces about the thrill of falling in love and the big dreams they shared. But, now, all that's left of the relationship is a class ring.

“I Got the Boy” struck a personal chord with Kramer, who has always wanted to pen a song about her high school sweetheart but could never get it on paper. Fortunately, the writing team of Connie Harrington, Tim Nichols and Jamie Lynn Spears (Britney’s sister) nailed her sentiments perfectly, using jewelry to represent the difference between young love and a mature relationship.

Kramer was introduced to the song by her producer, Scott Hendricks.

“I started bawling,” she told Billboard magazine. “That’s the story. Those are the words that I couldn’t write. It was 100% true. I’m very fortunate that the song came about. It’s my life.”

Kramer told Billboard in 2015 that the song has resonated with her fan base, even the men who see it from the opposite perspective.

“On my Twitter, people are saying things like, ‘I got the girl, not the woman.’ It goes both ways, for sure,” she noted.

Born Jana Rae Kramer in Rochester Hills, Mich., the 38-year-old singer also has an impressive resume of acting credits, including a four-year run as Alex Dupre on The WB television series One Tree Hill. She began her music career in 2012 with the release of her single “Why Ya Wanna.”

Kramer admitted to Billboard that it stung a bit when she learned that her high school boyfriend was married with two children.

The singer-actress was referring to former Washington Redskins tight end Mike Caussin, who she married in 2015. They had two children together, but sadly divorced in the spring of 2021.

Please check out the video of Kramer's live performance of "I Got the Boy.” The lyrics are below if you’d like to sing along…

“I Got The Boy”
Written by Connie Harrington, Tim Nichols and Jamie Lynn Spears. Performed by Jana Kramer.

I saw your picture in a paper, Honeymoon in Jamaica, she’s a lucky girl
You look so grown up in your black tux, from a ball cap in a pickup, seems like another world
You and me and our big dreams, falling in love
We were two kids in the backseat, all fearless and young

Yeah there’s an old you that I knew,
Fake IDs to get into those spring break bars
Back woods on a four wheel, hanging on tight, I can still feel my racing heart
And now you’re cleaned up with a hair cut, nice tie and shoes
If things were different and I had a choice, which would I choose?

I got the first kiss and she’ll get the last
She’s got the future and I got the past
I got the class ring, she got the diamond and a wedding band
I got the boy and she got the man