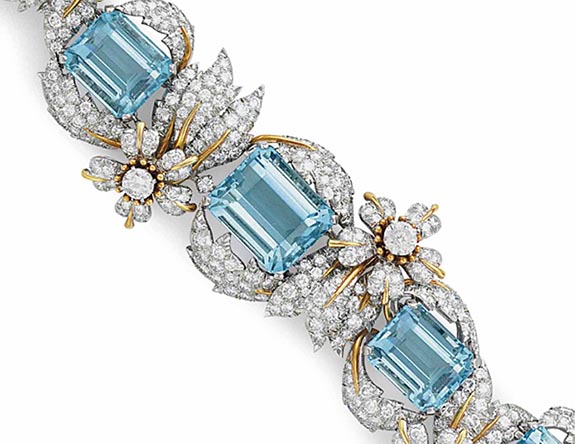 An aquamarine and diamond “Leaves and Flowers” bracelet (circa 1960) designed by Jean Schlumberger for Tiffany & Co., for example, was estimated to sell for $40,000 to $60,000. When the hammer went down, the bracelet had fetched $250,000 — more than four times the high estimate.

The jewelry offerings at Christie's represented the continuation of the auction house's mammoth Rockefeller family estate sale of some 1,550 lots across six auctions. The proceeds of the sales — a tally that is likely to exceed $1 billion — will be used to support 11 philanthropies.

Before David Rockefeller died in March of 2017 at the age of 101, he ordered that the bulk of his estate — including three homes, and a collection of museum-quality paintings, tapestries, furniture and fine jewelry — would be used to fund bequests to his favorite charities. His beloved wife had passed away in 1996.

Peggy and David Rockefeller's purchases reflected a high level of refinement. They owned impressionist and modern art from Pablo Picasso, Claude Monet, Henri Matisse, Juan Gris and Paul Gauguin, for example. Their sophisticated taste expanded into the realm of fine jewelry, with more of the finest examples shown, below... 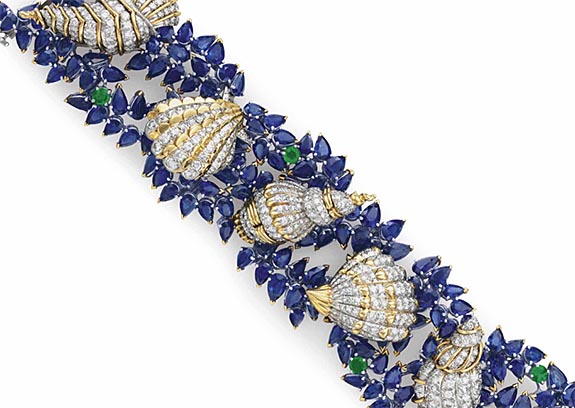 • Also designed by Schlumberger for Tiffany & Co., circa 1958, is this sapphire, diamond and emerald "Sea Shells" bracelet. Christie's set the pre-sale estimate at $50,000 to $70,000, but the realized price was $250,000. The pear-shaped sapphire and circular-cut emerald openwork band is set with six diamond-embellished sculpted gold shells. 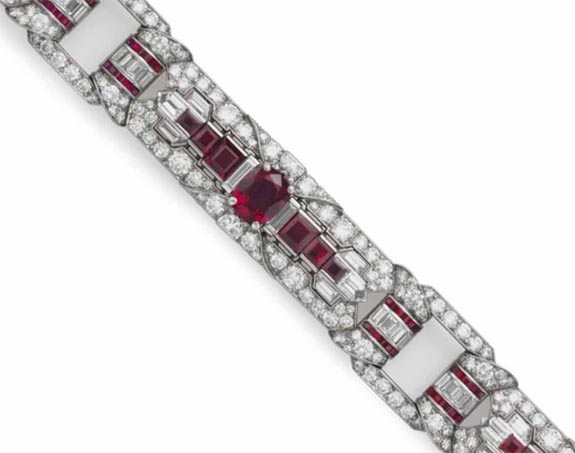 • This ruby and diamond bracelet by Raymond Yard, Rockefeller's personal jeweler, is designed as three articulated circular and fancy-cut diamond panels, each centering upon an oval-cut Burmese ruby. The pre-sale estimate was $40,000 to $60,000, but the selling price climbed all the way to $348,500. 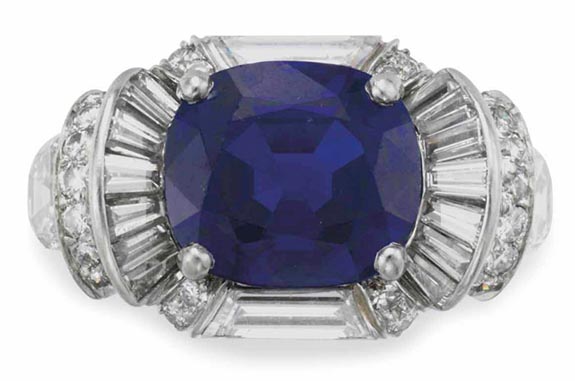 • Another Yard piece (circa 1944) — a sapphire and diamond ring — was one of the auction's top lots. Originally expected to sell in the range of $150,000 to $200,000, the platinum ring set with a 5-carat oval-cut Kashmir sapphire and surrounded by circular, baguette and half moon-shaped diamonds sold for $372,500. 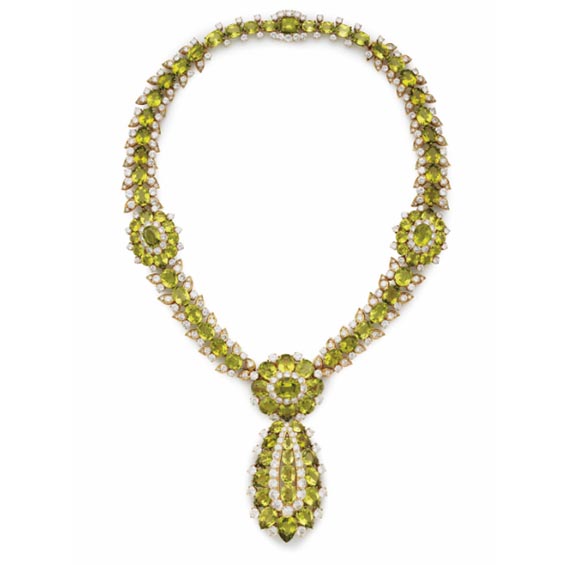 • Lot 174 of the auction included a suite of peridot and diamond jewelry by Van Cleef & Arpels. When the hammer went down at Christie's, the sale price of $348,000 had surpassed the pre-sale high estimate by $228,000. Suspended from the peridot necklace is a detachable pear- and oval-cut peridot pendant-brooch. Also included in the suite are peridot earrings, bracelet and ring.