A Pennsylvania family enjoying a vacation at Rehoboth Beach, DE, expected the trip would net a lot of quality time and a bounty of souvenir mugs and T-shirts. What they got as a bonus was a rare purple pearl and a memory of a lifetime.

Scott Overland of Phoenixville, PA, was finishing up his littleneck clams appetizer at Salt Air restaurant when he encountered a hard object.

“I thought I bit down on a piece of shell or something,” Overland told delawareonline.com. “My wife thought it was a piece of candy because it looked like those candy dots.” 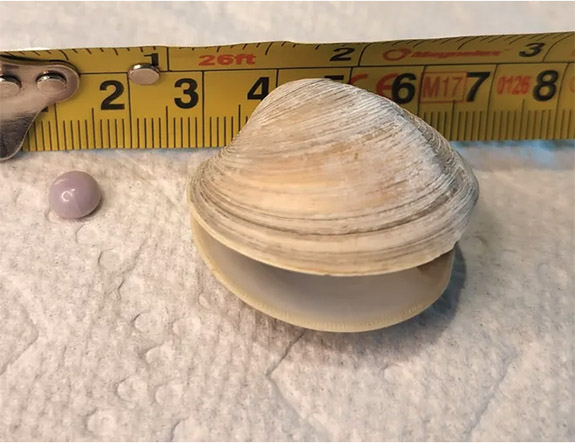 The bright lavender object was domed at the top and flat on the back, similar to the button candies that come on a paper roll. But, when Overland inspected the inside of the clam shell, he noticed an indentation where the pearl had grown. He placed it there and it fit perfectly.

“We had never heard of a pearl in a clam," he added. "I always thought they came in oysters.”

Overland has since learned that natural pearls do, indeed, grow in clams. They are very rare and a single specimen — depending on the size, quality and shape — can be worth thousands of dollars.

Pearls found in clams are classified as non-nacreous and have a porcelain-like appearance. Pearls grown in oysters present a deeper glow caused by layers of nacre that refract the light.

Natural pearls are organic gems, created by a mollusk totally by chance, without human intervention. Cultured pearls, by comparison, are grown under controlled conditions, where a bead is implanted in the body of the mollusk to stimulate the secretion of nacre.

Clams served at the Salt Air restaurant are the popular northern quahog variety grown by Cherrystone Aqua Farms in the Chesapeake Bay. A spokesperson for the grower's parent company, Ballard Clams and Oysters, told delawareonline.com that he hears about diners finding pearls in their clams or oysters two or three times a year.

Overland, 37, told Fox 5 DC that he was planning to get the pearl appraised and had no immediate plans to sell it.

He said that the craziest part of the story is that the clams were nearly returned to the kitchen uneaten because they came with a pepper garnish that Overland's wife didn't care for.

They decided to accept the appetizer as it was presented and were rewarded with a glistening gem.