Welcome to Music Friday when we bring you great throwback songs with jewelry, gemstones or precious metals in the title or lyrics. Today, we kick off the season of giving with this little ditty by Andy Williams called "Christmas Holiday." 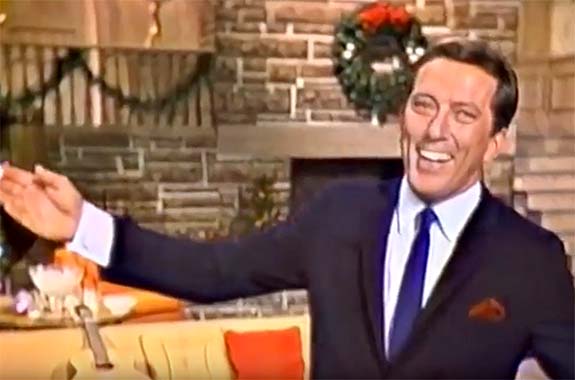 In the song, Williams describes a picturesque Yuletide scene: A turkey cooking in the oven, fresh snow on the ground and our hero about to surprise the love of his life with a very special gift of fine jewelry.

He sings, "This year, we shall know a wonderful Christmas / And the glow of candlelight / Let's have a fling! / I'll give you my present, a wedding ring! / Hear me sing."

Written by Craig Vincent Smith, "Christmas Holiday" appeared as the sixth track of Williams' popular Merry Christmas album, which was released in 1965 and charted for six consecutive years on the Billboard Christmas Albums list. The album earned a platinum certification, with more than one million copies sold.

Long before he became a star, Williams and his three older brothers performed in a children's choir at the local Presbyterian church in Cincinnati. They formed the Williams Brothers quartet in 1938 when Andy was just 11 years old and made their mark by doing live performances on local radio stations.

After moving to Los Angeles in 1943, the brothers got their big break when Bing Crosby asked them to sing on his hit record "Swinging on a Star." Soon after, the Williams boys got to perform together in a number of musical films.

The youngest Williams brother began his solo career in 1953 and became a regular guest on the Tonight Show Starring Steve Allen.

From 1962 to 1972, Williams was considered one of the most popular vocalists in the U.S. Some of his biggest hits included "Moon River," "Can't Take My Eyes Off You" and the holiday song "It's the Most Wonderful Time of the Year."

During the peak of his career, Williams had recorded more gold albums than any solo performer except for Frank Sinatra, Johnny Mathis and Elvis Presley. He also hosted his own TV show, which earned three Emmy Awards for Outstanding Variety Series.

Williams, whose voice was described by President Ronald Reagan as a "national treasure," passed away in Branson, Mo., in 2012 at the age of 84.

Please check out the video of Williams' performance of "Christmas Holiday." The lyrics are below if you'd like to sing along...

Hear the bells ringing
Their ting-a-ling sound.
See the fresh snow,
It's white on the ground.
Hang up the stockings and
Let's have a holiday, today.

Bring out the holly, we mustn't delay!
'Cause all of our friends will be stopping today.
Warm the hot chocolate
And bring out the marshmallow tray.

This year, we shall know a wonderful Christmas
And the glow of candlelight
Let's have a fling!
I'll give you my present, a wedding ring!
Hear me sing.

Turkey's a-cookin' and candy cane sticks,
With reindeer and sleigh bells and good old Saint Nick
Two kids sneakin' kisses beneath all the mistletoe,
As if we didn't know!

This year, we shall know a wonderful Christmas
And the glow of candlelight
Let's have a fling!
I'll give you my present, a wedding ring!
Hear me sing.

Yuletide, good cheer!
Christmas is here.
This one, we'll share,
We haven't a care.