Welcome to Music Friday when we bring you awesome songs with jewelry, gemstones or precious metals in the title or lyrics. Today, pop star Katy Perry encourages young women to aspire to greatness in her 2010 ballad, "Pearl." 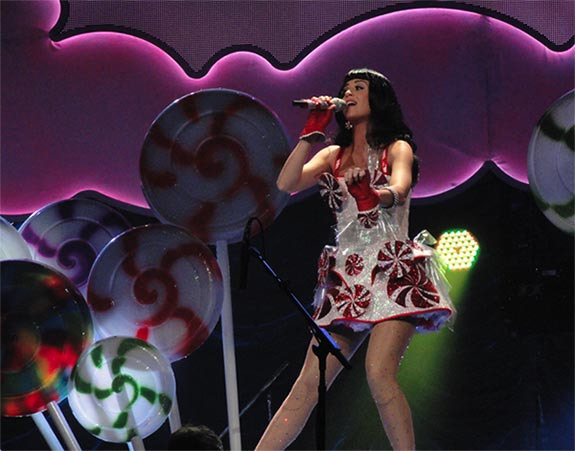 On her YouTube channel, Perry explained that "Pearl" is a song she wrote for anyone who's been held down — by friends, or relationships or family members.

"[The song] talks about a girl who used to be a pearl, and how she became a shell of herself," said Perry. "She let this person rule her world and she's kind of a skeleton now. Her rainbow is a flat shade of grey."

She added, "It's a really important message to send to be confident in who you are and your relationships. And to love yourself most importantly before anybody else loves you."

Perry told MTV News that she felt that the nearly completed Teenage Dream was missing something, so she and her writing partners added one more tune that completed her album in just the right way.

"And it was kind of just like, 'All right, now I have this crown, and I have all these jewels, and I can put these little jewels into the crown, and I feel like it's a complete presentation, something I'm really proud of.'"

Teenage Dream was a tremendous success, charting in 28 countries, including #1 on the US Billboard 200 album chart and #1 on the Canadian Albums Chart. The album and its singles earned Perry seven Grammy Award nominations, including Album of the Year, Best Pop Vocal Album and Record of the Year.

Born Katheryn Elizabeth “Katy” Hudson in Santa Barbara, Calif., the singer changed her name in the early 2000s so she wouldn’t be confused with actress Kate Hudson. The daughter of Christian pastor parents, Perry grew up singing in a church choir, where she developed an affection for gospel music. Perry was dropped by two record labels before going on to sign with Capitol Music Group in 2007.

Over the past decade, the 35-year-old Perry has become one of the most successful musical artists of all time, having sold more than 18 million albums and 125 million singles globally.

Trivia: Perry's "Pearl" may have been inspired by her "wonderful" paternal grandmother, Ann Pearl Hudson, who sadly passed away in March at the age of 99.

"When my fighter spirit comes out, that’s Ann," Perry wrote in an Instagram tribute.

Please check out the audio track of “Pearl.” The lyrics are below if you'd like to sing along...

She was a hurricane (-cane, -cane, -cane)
But now she's just a gust of wind
She used to set the sails of a thousand ships
Was a force to be reckoned with

'Cause I used to be a shell
Yeah, I let him rule my world, my world

You don't have to be a shell, no
You're the one that rules your world, oh
You are strong
And you'll learn that you can still go on

And you'll always be a—a pearl

Music Friday: Adele Turns Sorrow Into Treasured Gold in Her Mega-Hit, ‘Rolling in the Deep’

FDNY to the Rescue: Bridal Jewelry Pulled From Utility Grate in Manhattan

Music Friday: Pink Shows Off Her ‘Gold Diamond Rings’ in 2001’s ‘Get the Party Started’

Can Diamond Filtration Improve the Taste of the World's Finest Vodka?