Welcome to Music Friday when we bring you chart-topping songs with jewelry, gemstones or precious metals in the title or lyrics. Today, we have Kenny Chesney singing the #1 country music single of 2002, “The Good Stuff.” 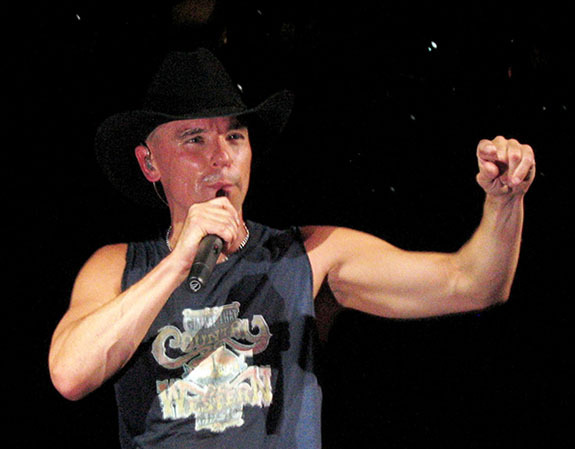 In the song, a young man learns some critical life lessons from a middle-aged barkeep who recently lost his wife to cancer. The younger man heads to the bar after having a major disagreement with his new wife, and orders “the good stuff.” But instead of serving whiskey or beer, the bartender pours two glasses of milk and shares his views about the things in life that are really “the good stuff.”

Among these items is an engagement ring that a nervous suitor accidentally dropped into a plate of spaghetti and a cherished pearl necklace that marked a special occasion.

The sing-along chorus contains these memorable lines… “’Cause it’s the first long kiss on a second date / Momma’s all worried when you get home late / And droppin’ the ring in the spaghetti plate / ‘Cause you’re hands are shakin’ so much.”

Later in the song, Chesney sings, “Was the sight of her holdin’ my baby girl / The way she adored that string of pearls / I gave her the day that our youngest boy Earl / Married his high school love.”

Written by Nashville hitmakers Jim Collins and Craig Wiseman, “The Good Stuff” was the second single from Chesney’s album No Shoes, No Shirt, No Problems.

Wiseman told The Boot that “The Good Stuff” was loosely based on the heartbreaking story of a dear friend, Rusty Martin, who lost his wife to cancer.

“I actually played Rusty the song,” Wiseman said. “I told him the song was inspired by him in some ways so I wanted to make sure he was OK with it.”

Wiseman continued: “I had gotten in touch with the funeral home where he had buried his wife and had a matching foot stone made for her that was engraved with ‘The Good Stuff.’ I went and gave it to him at the No. 1 party. Everybody was crying.”

Born in Knoxville, TN, in 1968, Chesney has recorded 32 Top-10 singles on the US Billboard Hot Country Songs and Country Airplay charts and has sold more than 30 million albums worldwide.

We hope you enjoy the video of Chesney's live performance of “The Good Stuff.” The lyrics are below if you’d like to sing along…

Well, me and my lady had our first big fight
So I drove around till I saw the neon light
The corner bar. It just seemed right so I pulled up.

Not a soul around but the old bar keep
Down at the end lookin’ half asleep
But he walked up and said, “What’ll it be?”
I said, “The good stuff.”

He didn’t reach around for the whiskey.
He didn’t pour me a beer.
His blue eyes kinda went misty.
He said, "You can’t find that here."

‘Cause it’s the first long kiss on a second date.
Momma’s all worried when you get home late
And droppin’ the ring in the spaghetti plate
‘Cause you’re hands are shakin’ so much

And it’s the way that she looks with the rice in her hair.
Eatin’ burnt suppers the whole first year
And askin’ for seconds to keep her from tearin’ up
Yeah man, that’s the good stuff.

He grabbed a carton of milk and he poured a glass.
And I smiled and said, "I’ll have some of that."
We sat there and talked as an hour passed like old friends.

I saw a black-and-white picture and it caught my stare.
It was a pretty girl with bouffant hair
He said, "That’s my Bonnie, taken ’bout a year after we wed."

He said, "I spent five years in the bar when the cancer took her from me.
But I’ve been sober three years now
‘Cause the one thing’s stronger than the whiskey.
Was the sight of her holdin’ my baby girl
The way she adored that string of pearls
I gave her the day that our youngest boy Earl
Married his high school love.
And it's a new t-shirt sayin’ I’m a grandpa.
Bein’ right there as our time got small
And holdin’ her hand when good the Lord called her up
Yeah, man, that’s the good stuff."

He said, "When you get home she’ll start to cry.
When she says, 'I’m sorry,' say 'So am I.'
Look into those eyes so deep in love and drink it up
‘Cause that’s the good stuff."


Credit: Image by LawrenceFung, CC BY 2.0, via Wikimedia Commons.