Welcome to Music Friday when we bring you wonderful songs with jewelry, gemstones or precious metals in the lyrics or title. Today, British songstress Billie Marten delivers her enchanting acoustic cover of "The Book of Love." 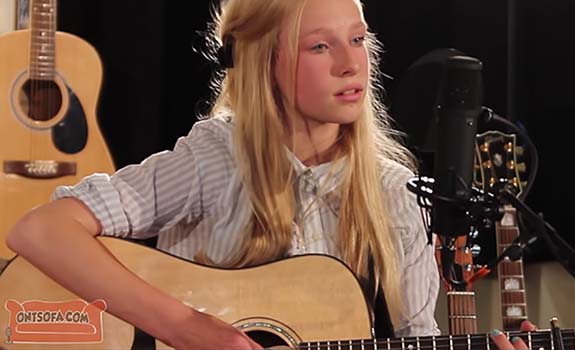 In the song, Marten explains how love is unnecessarily complicated and frequently irrational. In fact, if someone could write The Book of Love, it would be a mammoth volume — long, boring and overwrought with "flowers and heart-shaped boxes and instructions for dancing." Love, she contends, is spending special moments together, and expressing one's love with a time-honored symbol of jewelry.

Written by Stephin Merritt and originally released by American indie pop group The Magnetic Fields in 1999, "The Book of Love" was covered by British rocker Peter Gabriel, whose version appeared in the soundtrack of the 2004 flick, Shall We Dance. The song earned a cult following in 2010 when Gabriel's "Book of Love" was used during the series finale of the hit show Scrubs.

Born Isabella Sophie Tweddle in Ripon, England, in 1999, Marten began playing the guitar and singing when she was just seven years old. In 2008, she established a channel on YouTube, where she posted covers of pop songs, mostly for the benefit of her grandparents who lived in France.

When she was 12, Marten was invited to do a few sessions for a local YouTube channel called "Ont' Sofa." Immersed in a studio filled with Fender guitars, the young lady performed a number of popular songs, including her beautiful, effortless rendition of "The Book of Love." The videos went viral and her singing career was set in motion. She was signed to Chess Club Records, a division of Sony Music, in 2015, and was nominated for Britain's Sound of 2016 Award.

Please check out the video of Marten's "Ont' Sofa" performance of "The Book of Love." The lyrics are below if you'd like to sing along...

"The Book of Love"
Written by Stephin Merritt. Performed by Billie Marten.