A seven-tier stackable ring that uses champagne-colored diamonds to represent all-beef patties, tsavorites to depict the lettuce and pickles, and orange sapphires to illustrate the special sauce is the scintillating prize in McDonald's romantic "Bling Mac Ring" competition. 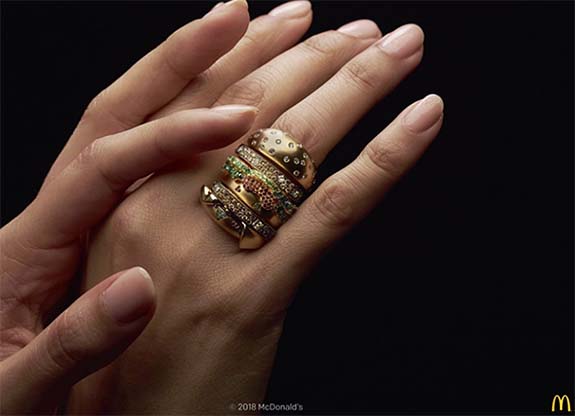 Valued at $12,500, the fanciful ring by New York-based designer Nadine Ghosn will be awarded to the Twitter user who does the best job professing his or her love for any of the three Big Mac sandwiches — Grand Big Mac, Big Mac and Mac Jr. The competition marks both Valentine's Day and the 50th anniversary of the Big Mac. 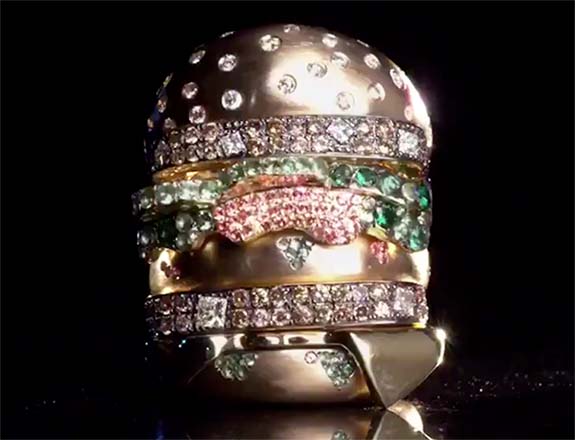 Just about everybody knows via the famous McDonald's jingle that the Big Mac consists of two beef patties, special sauce, lettuce, cheese, pickles, onions on a (three-part) sesame seed bun. Ghosn's challenge was to reimagine its iconic multi-layered sandwich in 18-karat gold and precious stones. We particularly like the sesame seeds rendered in flush-set round white diamonds.

“They were very adamant about having every burger ingredient represented in the ring,” Ghosn told NationalJeweler.com. 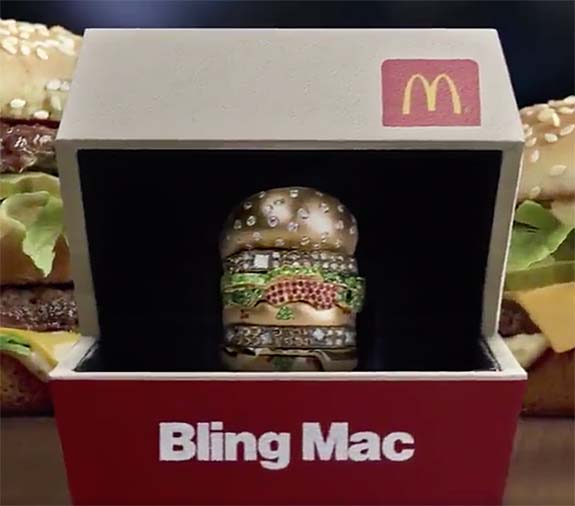 The competition, which started February 7 and will run through Valentine's Day, February 14, is being promoted via McDonald's Twitter page. The instructions: "Tweet @McDonald’s with #BlingMacContest and your funniest, most creative vows of love to the Big Mac burgers to compete to win the Bling Mac Ring." No purchase is necessary to participate.

A panel of experts will rate the entries based on the following criteria: 40% creativity; 30% love and affinity for the Big Mac sandwich; and 30% humor. Judging will take place from February 19 through February 28 and the winner will be announced shortly thereafter. In addition to the ring, the winner will get a check for $4,286 to help pay for the taxes or to be used at the winner's discretion.

The Big Mac was invented in 1967 by Jim Delligatti, a McDonald's franchise owner in Uniontown, Pa. It was an instant success in the Greater Pittsburgh area and added to the McDonald's menus nationwide a year later. It was billed as a "meal disguised as a sandwich."

While the regular Big Mac has been a staple of McDonald's menus for five decades, the company is re-releasing the Grand Mac and Mac Jr. for a limited time.