Sports fans and jewelry lovers will certainly remember 2019 as the year of wonderful, over-the-top championship rings. 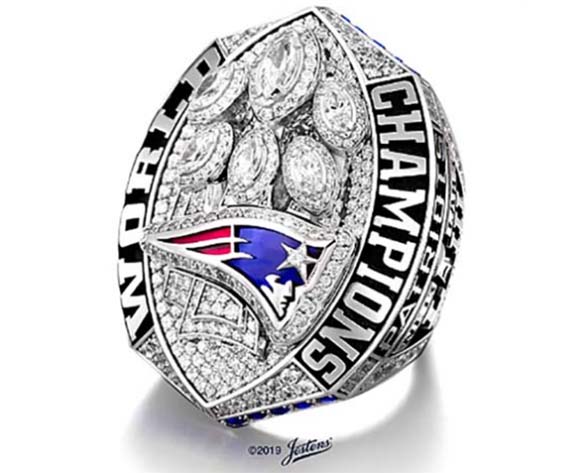 It was a year the New England Patriots celebrated their sixth Super Bowl victory, the Boston Red Sox commemorated a franchise-record 108 wins, the Toronto Raptors brought the Larry O’Brien trophy to Canada for the first time, the St. Louis Blues finally carried the Stanley Cup aloft, breaking a 52-year drought, and Atlanta United players came out on top in just their second MLS season.

Each amazing accomplishment was accompanied by an equally impressive ring.

• In June, the New England Patriots' sixth Super Bowl ring was described by the team as the largest and most ornate ring ever created for any team in any sport. The football-shaped, 10-karat ring glistened with 422 diamonds weighing 8.25 carats and 20 blue sapphires totaling 1.60 carats.

The ring's design was loaded with symbolism. For instance, the design called for the iconic blue and red Patriots logo to be surrounded by 38 diamonds, with a 39th diamond set in the star. Combined, these 39 diamonds represented two NFL records achieved by the Pats with their Super Bowl LIII win. It was the franchise’s 37th playoff victory — more than any other NFL team. In addition, the Pats became the second team in NFL history to win six Super Bowls. 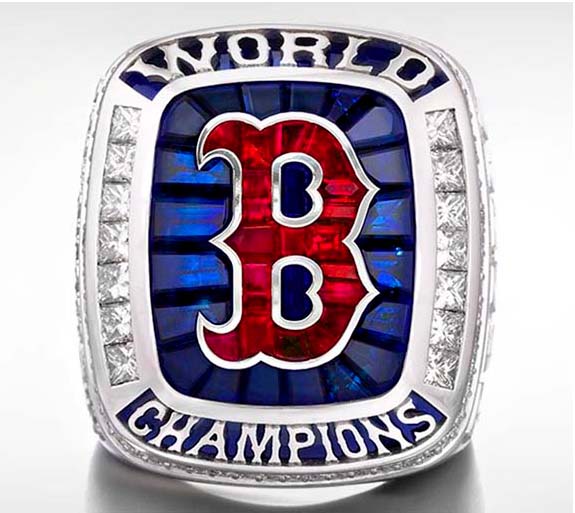 • Two months earlier, the Boston Red Sox received their World Series rings set with 185 gemstones weighing a total of 15 carats. The ring was a fitting tribute to what has been called a "team for the ages." The dominant Red Sox of 2018 notched a franchise-record 108 wins during the regular season and then pummeled three postseason opponents — the Yankees, Astros and Dodgers — at an 11-3 clip to secure their fourth title since 2004. 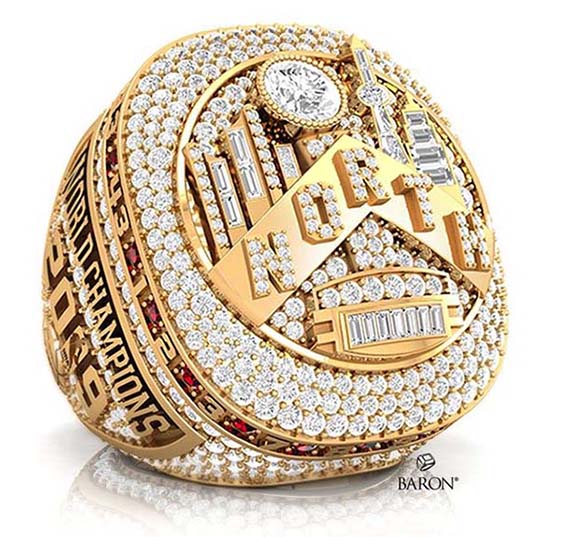 • In October, the Toronto Raptors celebrated their first-ever NBA championship with gigantic 14-karat yellow gold rings emblazoned with 650 diamonds weighing 14 carats. The number of diamonds and the total diamond carat weight were touted at the time as records for a championship ring in any sport.

The ring also set a new record for the largest single diamond in any professional championship ring. A 1.25-carat round diamond stands in for the basketball in the ring's representation of the Larry O’Brien trophy. The face of the ring is made up of 74 diamonds, representing the number of wins during the 2018-19 season. 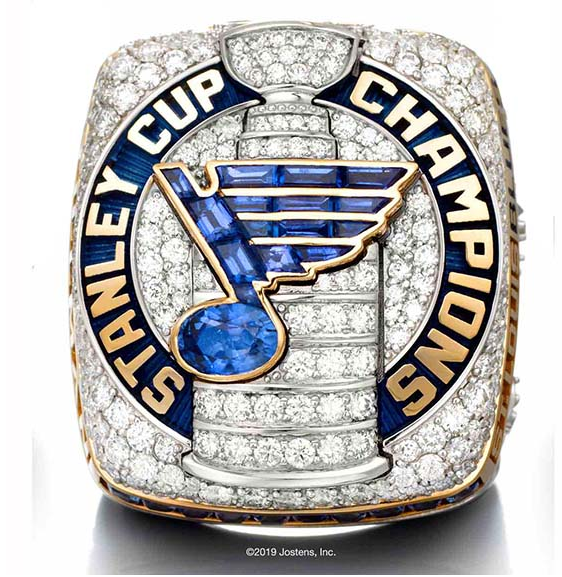 • At the end of September, the St. Louis Blues' received their first-ever Stanley Cup rings, which sparkled with 282 diamonds and 51 sapphires. The impressive 14-karat white and yellow gold rings boasted a total gem weight of 10.6 carats.

The ring face features the Blues' distinctive Blue Note logo rendered with 16 genuine, custom-cut blue sapphires. The number 16 represents the number of playoff victories earned by the Blues on their path to the championship. The Blue Note logo sits atop the Stanley Cup, rendered with 45 pavé-set diamonds. To the left and right of the Cup are 30 more diamonds for a total of 75 — a number representing the goals scored by the Blues during the 2019 postseason.

• And, finally, we revisit the rings presented to the Atlanta United players this past March. The ring's design uses white diamonds, yellow diamonds, custom cuts of garnet and onyx, and a single ruby to tell the story of a remarkable franchise that shot to the top of the soccer world in just its second season. The diamonds weigh a total of 2.03 carats.

Crafted in 10-karat white and yellow gold, the rings were adorned with 101 white diamonds that create a cascading waterfall effect on the ring top. An additional 14 color-enhanced yellow diamonds form the “A,” which sits atop the iconic five stripes, which mimics the distinctive red and black uniform of the team. Ring manufacturer Jostens rendered the five stripes in alternating custom-cut slices of garnet and black onyx. The stripes represent the five pillars of the team: unity, determination, community, excellence and innovation.