Here Are a Bunch of Fun Facts About the August Birthstone, Peridot August 1, 2019

Magnesium-rich forsterite is an absolutely colorless mineral. In its purest state, it looks a lot like glass, but when Mother Nature does her magic and replaces some of forsterite's magnesium atoms with iron atoms, the colorless stone is transformed into the beautiful bright green gemstone known as peridot. 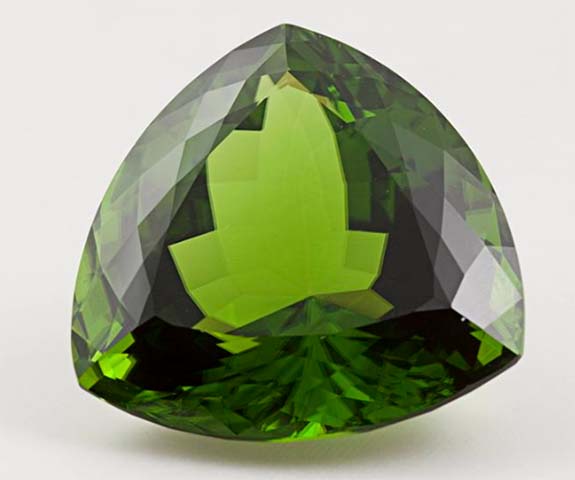 The triangular-cut peridot shown above weighs 100.15 carats and is one of the world's most striking examples of the August birthstone. Mined in Pakistan and exhibiting an exceptional vivid green hue and great brilliance, the gem was purchased by the Smithsonian with funds provided by the Tiffany & Co. Foundation. It has been part of the National Gem and Mineral Collection since 2011 and resides at the Janet Annenberg Hooker Hall of Geology, Gems and Minerals in Washington, D.C.

Peridot has been coveted for more than 3,000 years. According to the Smithsonian, ancient Egyptians fashioned beads from golden green peridot crystals mined on an island in the Red Sea. The island was known to the Greeks and Romans as Topazios and its verdant bounty (today's peridot) was known as topazion until the 18th century.

The Smithsonian noted that, for reasons that still remain unclear, the name topazion was hijacked during the 18th century and assigned to the gem we call topaz today. The yellowish-green stone was given a new name — peridot, which is derived from “faridat,” the Arabic word for gem.

Even today, topaz remains the confusing namesake of Topazios — an island off the coast of Egypt that never had a topaz mine. The ancient island of Topazios is now called Zabargad or St. John’s Island.

Most peridot originates deep in the Earth’s mantle, but scientists have also proven that August’s birthstone is truly extraterrestrial. It has been found embedded within meteorites and scattered across the surface of Mars.

Peridot can be found on five continents. The major sources are Burma, the U.S. (Arizona), Norway, Brazil, China, Australia, and Pakistan.

Peridot is one of three official birthstones for the month of August. The other two are spinel and sardonyx.