Golden treasure unearthed during the kitchen renovation of an 18th-century townhouse is likely to yield a $290,000 payday for a UK couple in Ellerby, a village in North Yorkshire, about 50 miles north of Manchester. 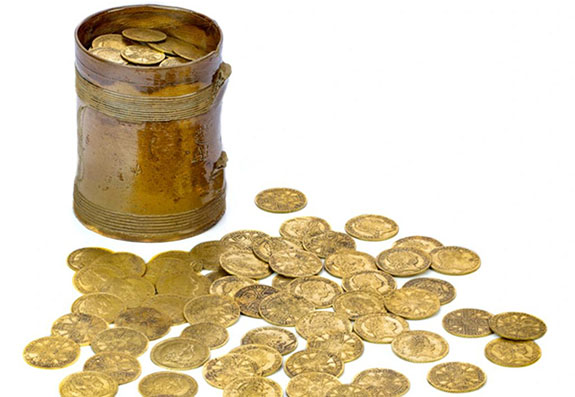 After ripping up the kitchen floor boards and breaking through a concrete slab, the couple encountered what they thought were old electrical connections. What they actually pulled out of the ground was an earthenware vessel about the size of a soda can filled to the brim with 264 gold coins. The container had rested undisturbed for nearly 300 years.

The well worn coins were dated from 1610 to 1727 and covered the reigns of James I through that of King George I. The gold coins carried face values between £50 and £100, but when they hit the auction block at Spink and Son in London on October 7 they will likely sell for more than a quarter million dollars. 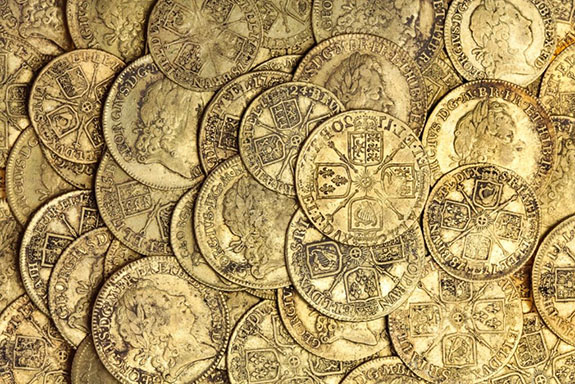 "It is a wonderful and truly unexpected discovery from so unassuming a find location," auctioneer Gregory Edmund said in the press release sent to CNN. "This find of over 260 coins is also one of the largest on archaeological record from Britain, and certainly for the 18th century period."

Spink and Son's research revealed that the "Ellerby Area Hoard," was likely accumulated by Joseph and Sarah Fernley-Maisters, who were married in 1694 and occupied the house until their deaths in 1725 and 1745, respectively. The couple was part of an influential family that traded in iron ore, timber and coal. Several family members served in the Parliament in the early 1700s.

Edmund added that the strategy of hiding gold under their kitchen floor likely reflected the couple's distrust of the newly formed Bank of England (1694) and the newfangled paper "banknote."

The auction house explained that the Fernley-Maisters family line dwindled soon after Sarah died at the age of 80, which is presumably why the coins were never retrieved.

According to artnet.com, the most unusual coins in the "Ellerby Area Hoard" include a 1720 George I guinea that reflects an embarrassing minting error. The coin has two "tails" sides. Another oddity is a 1675 Charles II guinea which misspells the King's Latin name as “CRAOLVS” instead of “CAROLVS.”