Living just 30 miles from Crater of Diamonds State Park in Murfreesboro, AR, has its perks — especially if you're an amateur treasure hunter. 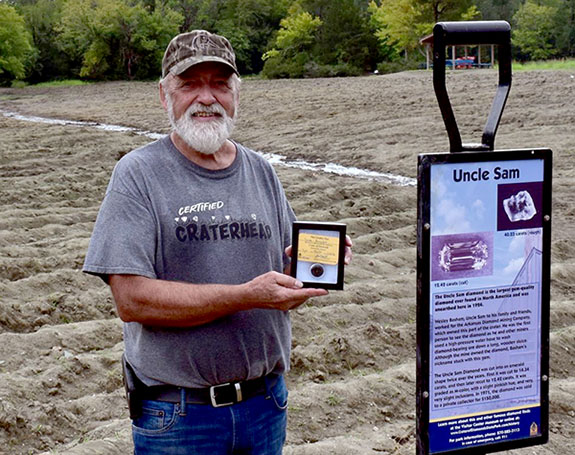 Over the past four years, Scott Kreykes of Dierks, AR, has registered more than 80 diamonds at the park, including his 50th of 2022. Even though it was only a 4-pointer, the pearl-shaped gem he found earlier this month was certified as the 35,000th diamond unearthed by visitors since the state park opened in 1972.

For this achievement, Kreykes was rewarded with a free two-night stay at an Arkansas State Park, recognition from Murfreesboro officials and a special display for his diamond and registration card.

Earlier this month, Kreykes had spent a day at the park sifting soil from the East Drain area of the 37½-acre search field, which is actually the exposed eroded surface of an ancient diamond-bearing kimberlite pipe. Amateur miners get to keep what they find at the only diamond site in the world that’s open to the general public.

What's more, visitors are allowed to take home one five-gallon bucket of sifted gravel to inspect later and, on this day, that's exactly what Kreykes decided to do.

"Some visitors like to resift their gravel at home or wait for it to dry to look for the metallic shine of a diamond,” explained Park Interpreter Tayler Markham.

While searching through his gravel at home, Kreykes spotted a sparkly, pearl-shaped stone and excitedly called his wife over to show her. He knew the park was preparing to celebrate the 35,000th diamond milestone and was hopeful that he would register the winning gem.

As he left his home to return to the park on the morning of September 6, he slipped his sparkler into a glass vial and told his wife, “This could be the 35,000th diamond!”

Kreykes carried his gem to the park’s Diamond Discovery Center, where staff registered it as a 4-point white diamond.

Kreykes told park officials that he had goosebumps upon learning that his find was the milestone diamond.

Many people who find diamonds at Crater of Diamonds State Park choose to name their gems. Kreykes chose "Leo" in honor of his grandson. 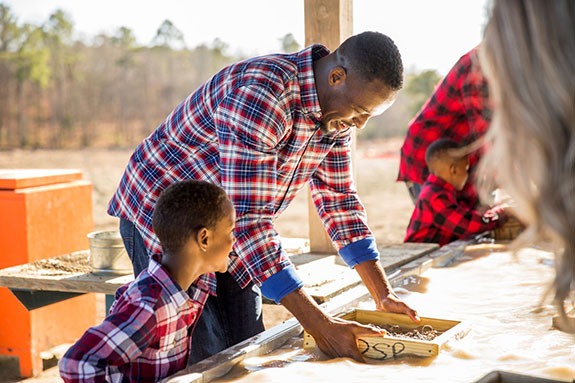 So far in 2022, 510 diamonds have been registered at Crater of Diamonds State Park. That's an average of about two per day.

“It’s amazing to work at a place with so much history,” Park Superintendent Caleb Howell said. “Every diamond found here has a story to go along with it, but milestones like this remind us of just how many discoveries park visitors have made over the past 50 years.”

Over the past 50 years, Crater of Diamonds State Park has hosted more than 4.5 million visitors and registered more than 1,000 diamonds topping 1 carat in weight.

The largest diamond ever discovered in the United States was unearthed in 1924 during an early mining operation at the Murfreesboro site. Named the Uncle Sam, this white diamond with a pink cast weighed 40.23 carats. It was later cut into a 12.42-carat emerald shape. The Uncle Sam is now part of the Smithsonian’s mineral and gem collection and can be seen at the National Museum of Natural History in Washington, DC. A marker at the park tells the story of Uncle Sam and points to the exact spot the gem was found.