Birthstone Feature: In 1961, Smithsonian Got This 60-Carat Ruby Bracelet From a Secret Donor July 2, 2019

Back in 1961, the Smithsonian received an extraordinary ruby-and-diamond bracelet from an anonymous donor. Fifty-eight years later, The Burmese Ruby Bracelet continues to be a star at the Gem Gallery at the National Museum of Natural History because it contains 31 highly prized pigeon's blood rubies from the Mogok region of Burma (Myanmar). Ruby is July's official birthstone. 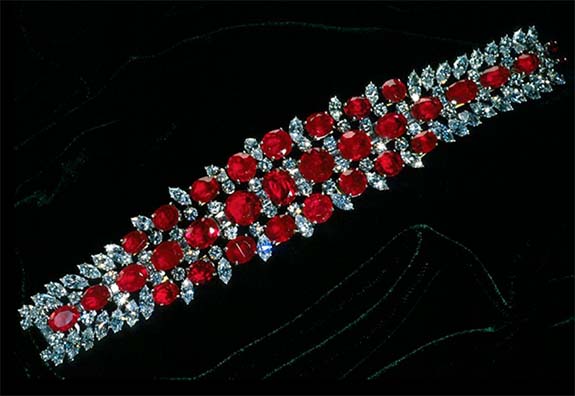 Weighing a total of 60 carats, the rubies display a slightly purplish-red color that is medium-dark in tone and enhanced by a red fluorescence. The rubies were taken from another piece of jewelry and reset by Harry Winston, Inc., in 1950. 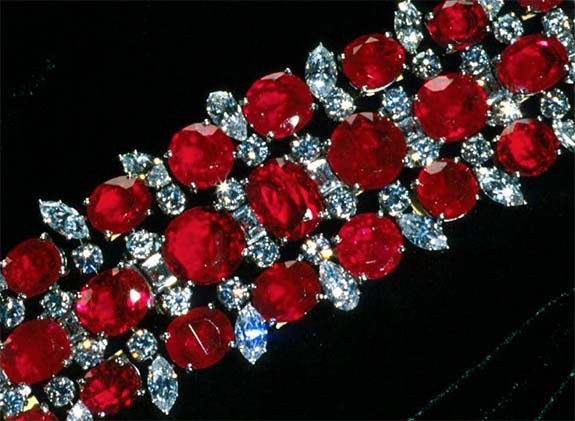 According to the Smithsonian, the original cuts were retained and the stones were reset in platinum in a three-row design with 107 pear, marquise and round brilliant cut diamonds totaling 27 carats.

Since the late 15th century, Burma, particularly the region around Mogok, has been a vital source for high-quality rubies. Mogok is a city founded more than 800 years ago in the Pyin Oo Lwin District of the Mandalay Region. Mogok and other villages nearby have been famous for their gemstones, especially rubies and sapphires. The mountainous Mogok area, known as the "Valley of Rubies,” is regarded as the original source of pigeon's blood rubies as well as the world's most beautiful royal blue sapphires.

Ruby is a variety of the mineral corundum (aluminium oxide). Gemstone-quality corundum in all shades of red are generally called rubies. Corundum is other colors are called sapphires.

The word "ruby" comes from "ruber," Latin for red. Rubies gets their color from the element chromium and boast a hardness of 9.0 on the Mohs scale. Only diamonds are rated higher at 10.0.

Legend tells us that rubies were revered as a mystical gem representing love, health and wisdom. It was a long-held belief that wearing a ruby brought good fortune to its owner. The value of a ruby increases based on its color, cut, clarity and carat weight.

While Burma has earned the reputation of producing the finest rubies, the coveted red gems have also been mined in Thailand, Afghanistan, Australia, Brazil, Colombia, India, Namibia, Japan and Scotland. After World War II, ruby deposits were discovered in Madagascar, Nepal, Pakistan, Tajikistan, Tanzania and Vietnam. In the U.S., rubies have been found in Montana, North Carolina, South Carolina and Wyoming.