After Being Secreted Away for 300 Years, Historic 'Farnese Blue' Diamond Emerges at Sotheby's March 26, 2018

The 6.16-carat blue diamond originally presented in 1715 as a wedding gift to Elisabeth Farnese, Queen of Spain, has emerged on the market for the first time and will be offered for sale at Sotheby’s Geneva on May 15. It is expected to fetch between $3.7 million and $5.3 million. 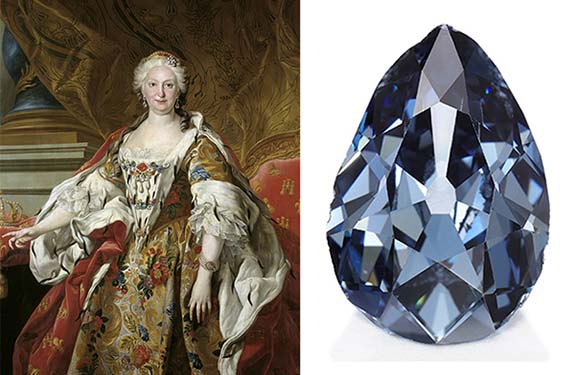 Sotheby's noted that the blue diamond was gifted to Farnese by the governor of the Philippine Islands on the occasion of her wedding to King Philip V of Spain, the grandson of Louis XIV, King of France. Blue diamonds were viewed as the ultimate royal gift in the 17th and 18th centuries because the color blue was identified as "the color of the kings."

Even though it had remained in the same family for more than 300 years, "The Farnese Blue" was never seen in public. In fact, except for close relatives and the family jewelers, no one knew of its existence. 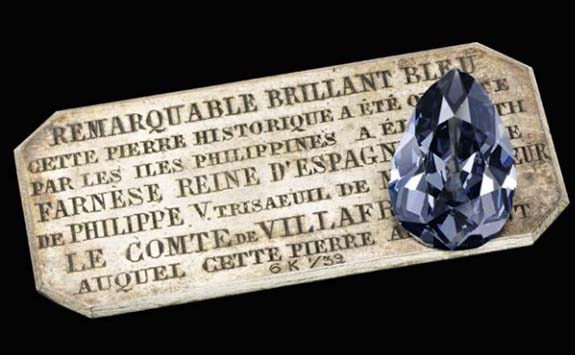 Secreted away in a "royal casket," the pear-shaped, fancy dark grey-blue diamond traveled across Europe, as Elisabeth and Philip’s descendants married into Europe’s most important dynasties. The "casket" likely refers to a rectangular jewelry box that is shaped like a casket, not a coffin.

The gift from the governor of the Philippine Islands was given to the Queen at the urging of the Spanish government. Governors of Spain's colonies from Mexico to the East Indies were encouraged to send wedding presents to Madrid.

In August of 1715, a fleet of 12 Spanish ships carrying a fortune in gold bullion and enormous emeralds set sail from Cuba, but were devastated by a hurricane in the gulf of Florida. Only one ship survived the voyage back to Spain, and that was the ship carrying the blue diamond.

"It is difficult to put into words the excitement of holding between thumb and forefinger a gem discovered centuries ago, knowing it originated in the legendary Golconda diamond mines of India," noted David Bennett, Chairman of Sotheby’s International Jewelry Division and Co-Chairman of Sotheby’s Switzerland. "This stone has witnessed 300 years of European history, and in color is reminiscent of historic Golconda blue gems, such as the Hope Diamond.”