Swiss luxury jeweler de Grisogono has sent the 813-carat "Constellation" rough diamond to Israel to undergo the first stages of a cutting process that is expected to yield a 350-carat D-flawless polished stone — a gem that would rank as the fourth-largest faceted diamond in the world. 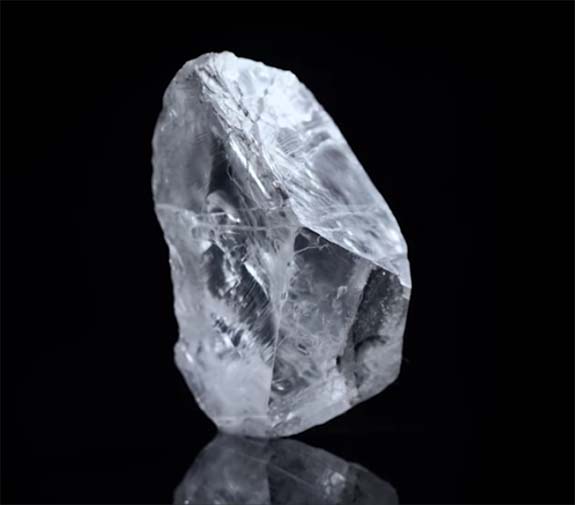 When he first purchased the rights to cut and polish the $63 million rough diamond from Dubai-based Nemesis International in September of 2016, the colorful founder of de Grisogono, Fawaz Gruosi, famously referred to the stone as his “princess.”

“I love her and I hate her,” he said. “Love because something like this is so exceptional — I could never dream to be able to have a stone like this in my own hands — and hate her because I don’t know how I’m going to dress her.”

Now, 15 months later, Gruosi has her attire all worked out. If all goes according to plan, the 813-carat rough — the most expensive of all time — will yield two historically significant D-flawless polished stones weighing 325 carats and 100 carats, as well as eight smaller diamonds, according to experts.

The Constellation was sent to Israel, where Diamond Laser Systems will utilize its state-of-the-art Synova Laser MicroJet to make the initial slices. The MicroJet has a laser beam guided by a hair-thin water jet. The water keeps the diamond cool during the process, minimizing the risk of damage.

Back in November of 2015, Lucara miners discovered two enormous gem-quality rough diamonds at its Karowe Mine in Botswana. The pair tipped the scales at a combined 1,922 carats. The larger of the two was the 1,109-carat “Lesedi la Rona,” which was purchased for $53 million in September by British billionaire and diamantaire Laurence Graff. The smaller of the two was the Constellation.

Both diamonds have been rated Type IIa by the Gemological Institute of America. Diamonds in this rare and coveted subgroup are chemically pure and often show extraordinary optical transparency.

The finished diamond that emerges from the Constellation will take its place among the largest and most famous faceted diamonds of all time. Currently, the top four are The Golden Jubilee (545.67 carats), The Cullinan I (530.20 carats), The Incomparable (407.48 carats) and The Cullinan II (317.4 carats). Both Cullinan diamonds were cut from the mammoth 3,106-carat Cullinan Diamond, which was discovered in South Africa in 1905.