One of the world’s most remarkable examples of February’s birthstone is the 56-carat deep purple gem at the center of the Tiffany Amethyst Necklace — an impressive work that resides at the Smithsonian’s National Museum of Natural History in Washington, DC. 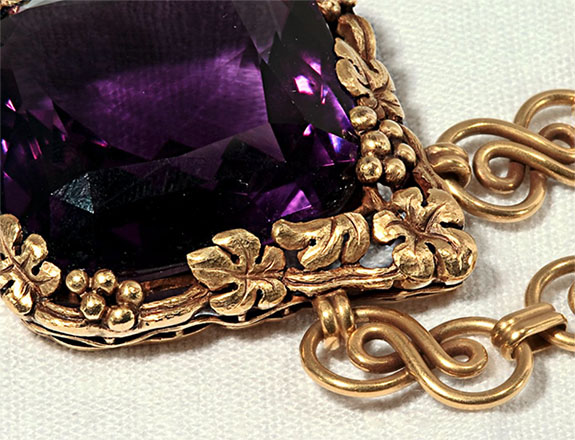 The square cushion-cut amethyst is delicately framed by 18-karat vines, leaves and grapes in a design conceived by Louis Comfort Tiffany in 1915. The amethyst, which displays flashes of red, is suspended as a pendant from a flowing double-figure-eight chain. The floral motif is an excellent example of Art Nouveau jewelry, which was popular during the turn of the last century (1890-1919). 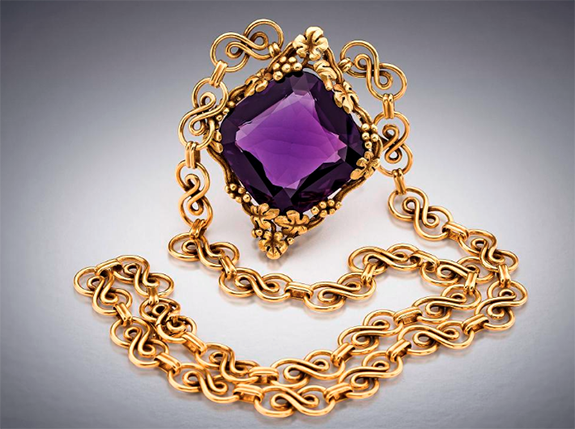 While most high-quality amethysts are currently sourced in Brazil and Uruguay, the gem in the Tiffany Amethyst Necklace is believed to be from Siberia, Russia, and is the largest and highest quality example of an amethyst from that region in the National Gem Collection.

George Kunz, chief gemologist at Tiffany’s during the early 1900s, was likely responsible for procuring the huge amethyst, according to a writeup in the Smithsonian’s Geo Gallery. Philanthropists June Rosner and Russell Bilgore donated this treasure to the Smithsonian in 2007.

Amethyst is the most coveted variety of quartz, which is clear in its pure state. Amethyst gets its purple color from trace amounts of iron displacing some of the silicon in the gem’s molecular structure. These traces of iron can give amethyst a wide range of colors, from almost white to deep purple.

Amethyst has been coveted for thousands of years and is one of the oldest recorded gemstones. They’ve been recovered from ancient Egyptian tombs and were prized by the Greeks, Romans, Babylonians and Hebrews.

Amethyst gets its name from the Greek word “amethystos,” which literally means “not to intoxicate.” Apparently, the Greeks believed amethyst could reverse the effects of drunkenness. Other characteristics attributed to amethyst include peace, balance, courage, stability and inner strength.

The color rating of an amethyst is determined by hue, tone and saturation. Hue is the color; tone is relative lightness or darkness of the color; and saturation relates to the color’s intensity, from dull to vivid.