33-Carat Diamond and Platinum Tiara With Ties to Spanish Royalty Comes to Auction at Bonhams September 18, 2018

On Wednesday of next week, a very rare and cleverly crafted platinum tiara with ties to Spanish royalty will be offered for sale at Bonhams, London. 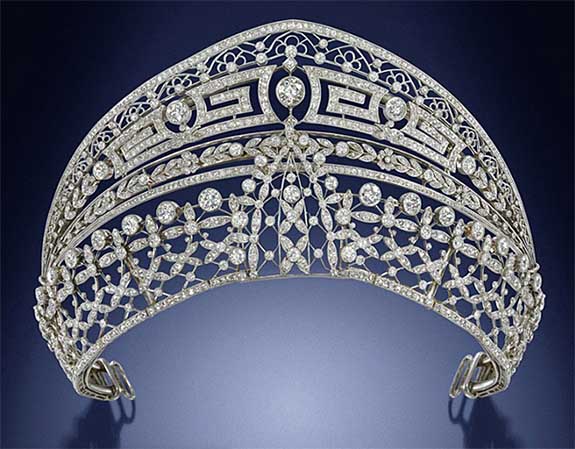 Reflecting the refined aesthetics of the Belle Époque period — the "beautiful era" of relative peace and prosperity prior to World War I — this 33.5-carat diamond tiara was designed by Spanish royal jeweler Ansorena and owned by Spanish countess Esperanza Chávarri Aldecoa, a former lady-in-waiting to Spanish Queen Victoria Eugenia, the wife of Alfonso XIII.

Dated to the turn of the last century, the platinum "Meander" tiara is designed as a double diadem that can be detached to form two separate tiaras, one of which may be flipped and worn as a choker. 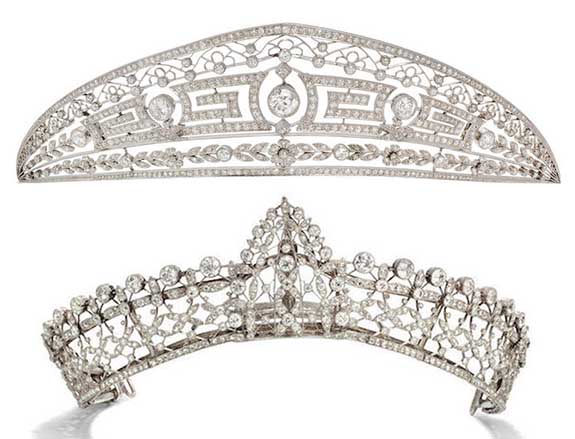 The upper band of meandering Greek key motifs, forget-me-not flowers and trailing laurel leaves represent true love and the triumph of love, according to Bonhams, while the lower band is designed as a delicate lacework lattice with central handkerchief motif, set throughout with old brilliant, single and rose-cut diamonds. The lower tiara features delicate milgrain detail and architectural knifewire tracery throughout.

"This tiara is of impeccable workmanship, and the elegant Louis XVI design of diamond wreaths and flowers has a lightness and lace-like quality made possible by the technical freedom and innovation of working in platinum," noted Emily Barber, director of jewelry at Bonhams. "Jewelers only began to understand how truly to exploit platinum from around 1900, so it is particularly interesting that this tiara is noted in Ansorena's archives as being conceived as early as 1890."

Bonhams reports that the tiara remained in the countess's family for more than 110 years.

During the Belle Époque period, which is conventionally dated from the end of the Franco-Prussian War in 1871 to the outbreak of World War I in 1914, women of high society enjoyed an opulent lifestyle, which included the practice of wearing tiara's to formal festivities.

According to Bonhams, the tiara was a fashion staple and a symbol of rank. It would be worn to private dinners, balls and the opera. What's more, the tiara was a symbol of betrothal. A new bride often received a tiara as a wedding gift to be worn later when she took her place in society.

The "Meander" tiara is currently completing a promotional tour, which saw stops in Hong Kong, Geneva and New York. The final leg will be London, where it will be offered for sale on September 26.