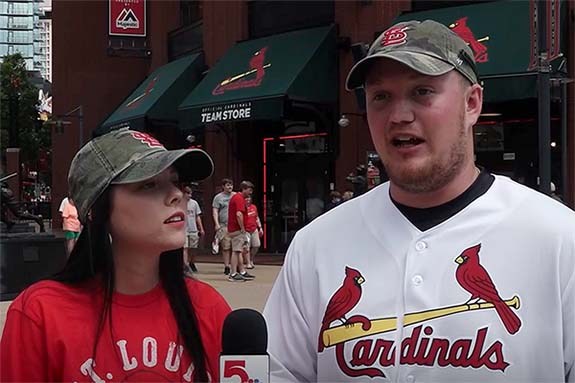 Not only was their surprise marriage proposal captured on the giant-sized video board in centerfield, but star catcher Yadier Molina was so taken by the romantic moment that he paused his at-bat during the bottom of the seventh inning. He stepped out of the batter's box, smiled at the couple's image in centerfield, and four pitches later blasted the game-winning homer. 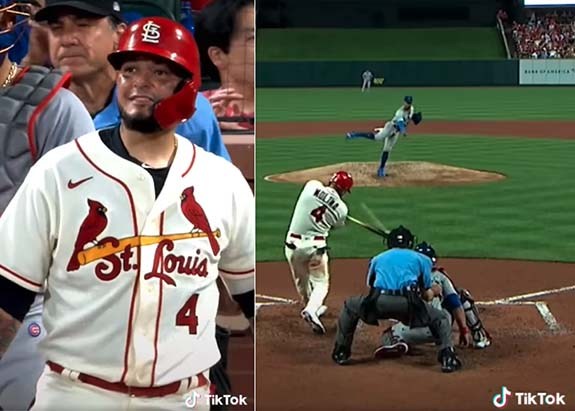 The beloved 38-year-old catcher and two-time World Series champion has been a Cardinal since 2004. He's also Pulley's favorite player.

Gregge told St. Louis NBC affiliate KSDK that he had been thinking about a ballpark proposal since the couple started dating.

On Saturday, he conspired with a Busch Stadium cameraman to set his surprise proposal in motion. 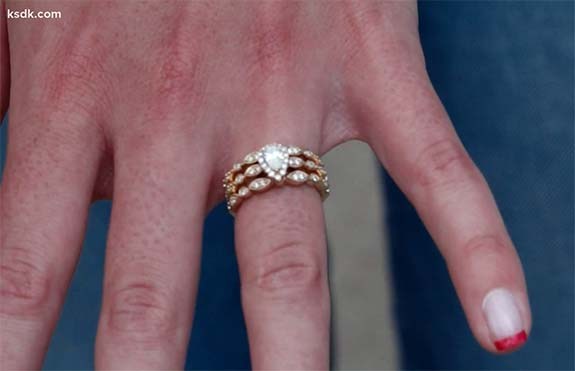 With a stadium full of fans and a TV audience watching in realtime, Gregge went down on one knee and proposed to Pulley, who immediately said, "Yes."

Four pitches later, the catcher who has played more than 2,000 games with the Cardinals launched a go-ahead home run to left field off Cubs pitcher Adbert Alzolay. It turned out to be the deciding run in the 2-1 Cardinals victory.

During a post-game press briefing, Molina commented about the young couple who had traveled 120 miles from Marion, IL, to create this special moment.

"Most of the time I don't look at it [the video board]," Molina said. "And this time I looked at it and was hoping she would say yes. Poor guy if she said no. I was happy for them. Obviously that moment for them was unbelievable. Especially after the home run. I wish them the best for the wedding."

To add a punctuation mark to an otherwise-perfect day, the couple was gifted a game-used base by some friendly — and generous — Cardinals fans who had been sitting in the same section as the couple.

"We took their information down," said Gregge. "They're going to get an invitation to the wedding."

Outside the stadium after the game, complete strangers approached the couple to offer their well wishes and to thank them for inspiring Molina to hit his home run.

"People were coming up and saying congratulations after the game, like so many people," Pulley said. "And they would say, 'Yadi smiled for you guys! Thanks for the win!' And we were like, 'You're welcome!'"

Pulley and Gregge now have a one-in-a-million story to tell their grandchildren, who will no doubt be Cardinal fans.

"We watched the video of Yadi basically giving us his blessing for our marriage and we're just so thankful and eternally grateful for that moment," Pulley told KSDK. "It's something we'll cherish forever."