All eyes will be on the "Raj Pink," the world's largest known fancy intense pink diamond, when it hits the auction block at Sotheby's Magnificent Jewels and Noble Jewels sale in Geneva on November 15. The exceptional 37.30-carat, cushion-modified, brilliant-cut gem is estimated to fetch between $20 million and $30 million — but could yield much more. 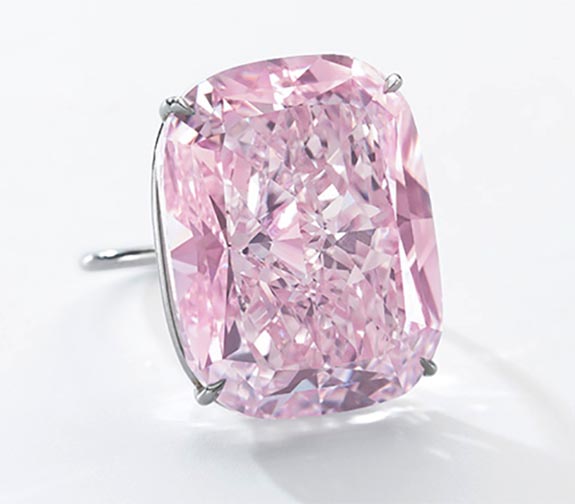 The current record holder for a fancy intense pink diamond is the 24.78-carat “Graff Pink,” which sold for more than $46.1 million at Sotheby’s Geneva in November of 2010. The rectangular-cut Graff Pink, which carries a clarity grade of VVS2, netted $1.86 million per carat.

The Raj Pink has a slightly lower clarity grade of VS1, but weighs 12.52 carats more than the Graff Pink. Sotheby's high estimate for the Raj Pink sets the per-carat price at $804,000, or less than half of what the Graff Pink earned per carat.

“The discovery of any pink diamond is exceptional," noted David Bennett, worldwide chairman of Sotheby’s International Jewelry Division, "but the Raj Pink's remarkable size and intensity of color places it in the rarefied company of the most important pink diamonds known.”

Discovered in 2015, the rough diamond that yielded the Raj Pink was studied for more than a year. It was then entrusted to a master cutter, who crafted it into an exceptional cushion-modified, brilliant-cut polished diamond.

The Gemological Institute of America characterized the Raj Pink as an “astonishing stone” and described its hue as “a very bright and ravishing fancy intense pink color.” The GIA also noted that it is rare for a diamond of such considerable weight to display such a "strong, unmodified pink color."

Of all diamonds submitted to the GIA each year, less than 0.02% are predominantly pink.