With Demand on the Rise, Russia Looks to Boost Alexandrite Production Fourfold April 15, 2021

Alexandrite is one of the rarest and most expensive gemstones on the planet. During an average year, worldwide production is barely 40 kilograms (88 lbs) and 93% of that production can be traced to Brazil. 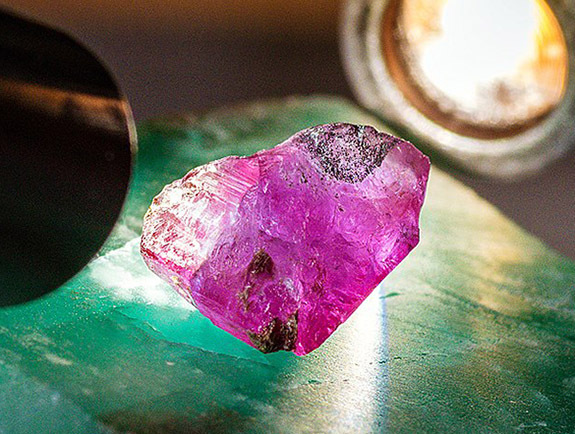 Russia ranks a distant second in alexandrite production, but is looking to quadruple the output of the unique color-change gem at its Mariinsky mine in the Ural Mountains. The announcement was made by officials at the state-controlled corporation Rostec, which operates the country’s only emerald placer mine.

(Placer mining is when minerals, such as alexandrite or emerald, are separated from sand or gravel using running water.)

The acceleration of alexandrite production in Russia is particularly significant because the gem — which is often called “emerald by day and ruby by night” — was originally discovered in the Ural Mountains in 1830.

Gem legend states that Finnish mineralogist Nils Gustaf Nordenskiöld (1792-1865) received a mineral sample from Count Lev Alekseevich Perovskii (1792-1856) that seemed very much like an emerald. But when the mineralogist inspected the gem under candlelight, the green gem had turned raspberry red.

According to the Smithsonian, Nordenskiöld had intended to name the new variety of chrysoberyl “diaphanite,” but the Count insisted that it be called “alexandrite” to curry favor with the Russian royal family and Czar Alexander II. (The gem was said to be discovered on the Czar’s birthday.)

Emphasizing that 2020 was a particularly difficult year at the Mariinsky mine due to COVID-19-related issues, Rostec chief executive Kirill Fedorov told the TASS news agency that his company mined just a single kilogram of alexandrite in 2020. That number should reach 4 kilograms in 2021 as production gears up to address a resurgence in demand.

Russia currently accounts for 4% of the world's alexandrite production. Fedorov called alexandrite "the world's rarest precious stone" and added that prices for both alexandrite and emeralds have increased in the range of 30% since 2018.

The color-changing property of alexandrite has been attributed to the presence of chromium in the gem’s chemical makeup. In normal daylight, a fine alexandrite will appear bluish-green, but under lamplight or candle flame, the gem transitions to a vibrant raspberry red. The chromium allows the gem to absorb light in the yellow and blue parts of the spectrum.

Credit: Image by Александр Рудный, CC BY 4.0, via Wikimedia Commons.