The 11.15-carat Williamson Pink Star lived up to its pre-sale hype at Sotheby's Hong Kong on Friday when — after a tense, 20-minute bidding war — the second-largest internally flawless, fancy vivid pink diamond ever to appear at auction sold for the staggering price of $57.7 million. That was more than 2.5 times the auction house's high estimate of $21 million. 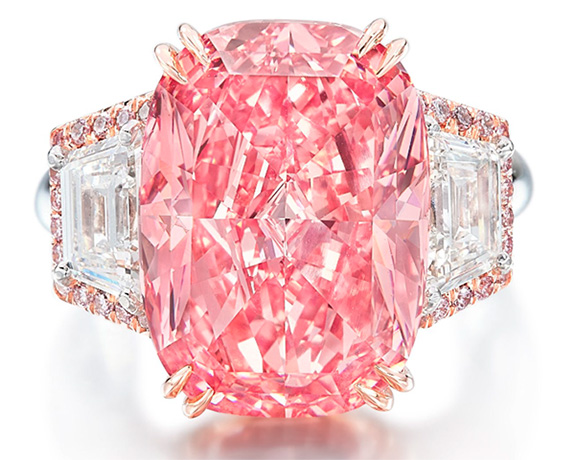 The winning bid submitted via phone by a collector in Boca Raton, FL, stands as the second highest price ever paid for any gem at auction. Only the 59.60-carat CTF Pink Star sold for more at $71.2 million (Sotheby's Hong Kong, 2017).

The Williamson Pink Star also crushed the record for the highest price-per-carat ever paid for any gemstone at auction. At $5.2 million per-carat, the gem soundly overtook the $3.9 million per carat achieved by the 14.62-carat Oppenheimer Blue at Christie's Geneva in 2016.

The bubblegum pink, cushion-cut gem (shown, above, mounted on an 18-karat ring and flanked by trapeze-cut diamonds) was cut from a 32-carat rough diamond unearthed at the famous Williamson Mine in Tanzania.

This is the same mine that produced the 23.6-carat “Williamson” pink diamond, which centers a Cartier-designed, flower-motif brooch often worn at high-profile events by the late Queen Elizabeth II. The gem had been given to the Queen as a wedding gift in 1947 by Canadian geologist Dr. John Thorburn Williamson, who owned the mine.

In fact, the name “Williamson Pink Star” is a nod to both the Williamson mine and the CTF Pink Star.

Just after Friday's single-lot sale in Hong Kong, the anonymous winning bidder renamed the stone “The Rosenberg Williamson Pink Star.” The Rosenberg part of the gem's name and the owner's location of Boca Raton, FL, offer clues to who the new owner could be. We assume that person will come forward shortly.

Market watchers believe that the strength of the pink-diamond segment is partly attributed to the closure of Rio Tinto’s Argyle Mine in Australia, which famously produced between 90% and 95% of the world’s pink and red diamonds during its 37 years of production. The mine officially ceased operations on November 3, 2020.

Unlike yellow or blue diamonds that owe their color to the presence of nitrogen or boron in their chemical makeup, pink diamonds owe their color to the effects of intense pressure and heat while they were still deep within the Earth. These factors caused distortions in the diamond’s crystal lattice that influence the way the gem absorbs green light, thus reflecting a pink hue.