This Blinged-Out $1.9 Million Harley-Davidson Is the Most Expensive Motorcycle in the World May 31, 2018

Luxury Swiss watch and jewelry brand Bucherer has teamed up with Harley-Davidson customizer Bündnerbike to create the blingiest, most expensive motorcycle in the world. 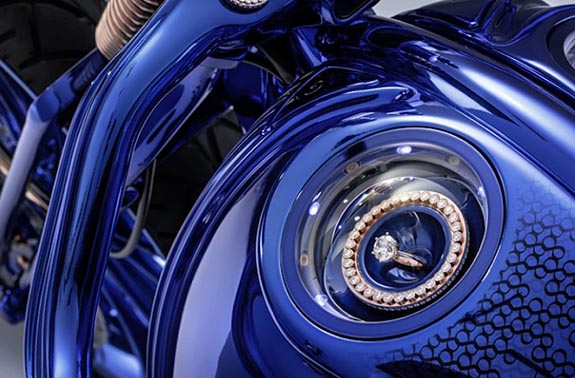 The $1.9 million "Blue Edition" Harley-Davidson is adorned with 360 diamonds, including a 5.4-carat diamond ring displayed under an armored glass compartment built into one side of the tank. Located under a second dome on the opposite side of the tank is a Carl F. Bucherer custom-made watch. 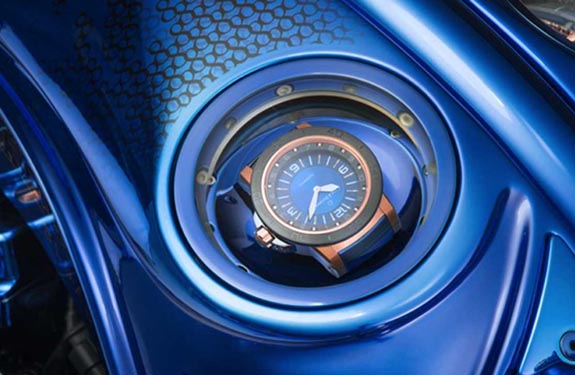 The dial of the watch boasts design elements of a motorcycle engine, and to ensure that vibrations do not damage the mechanical movement, the watch is housed in a cage with an elaborate holder made from silicon rings. The cage also serves as a watch winder. 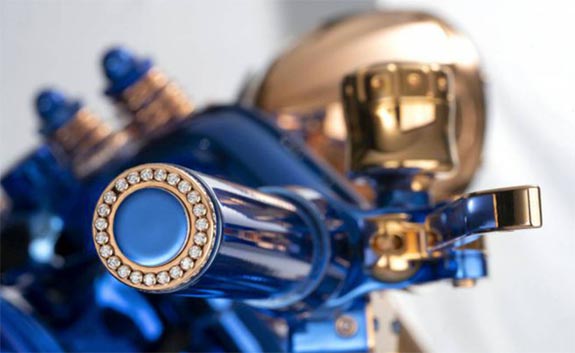 Bucherer's unique "Dizzler" rotating diamond rings are seen in a number of places on the bike, including smaller ones on the handgrips and forks and a larger one on the left half of the tank. 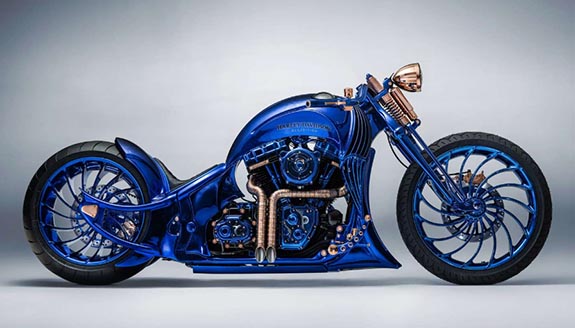 Other parts of the bike are plated in rose gold, including the throttle valves, headlight and screw heads.

Bündnerbike started with a Harley-Davidson Softail Slim S and then stripped it bare. Every metal element was welded, beaten, ground and polished by hand. The bike is even equipped with two retractable safes.

The iridescent blue color was achieved by first silverplating the entire motorcycle and then adding six coats of paint using a secret method.

It took a team of eight specialists 2,500 hours to put together the Blue Edition Harley-Davidson.

The dazzling bike is currently on display at the Bucherer London boutique within Selfridges department store. In a few weeks, the Blue Edition will embark on an extended tour that will take it to a number of other Bucherer outlets throughout Europe.