'Thank You, By the Way' Ad Campaign Gets a Boost From Indian Export Association December 23, 2021

Back in August of this year, the Natural Diamond Council (NDC) unveiled its global ad campaign titled, “Thank You, By the Way,” with the mission of communicating the massive socioeconomic benefits generated by the natural diamond industry. 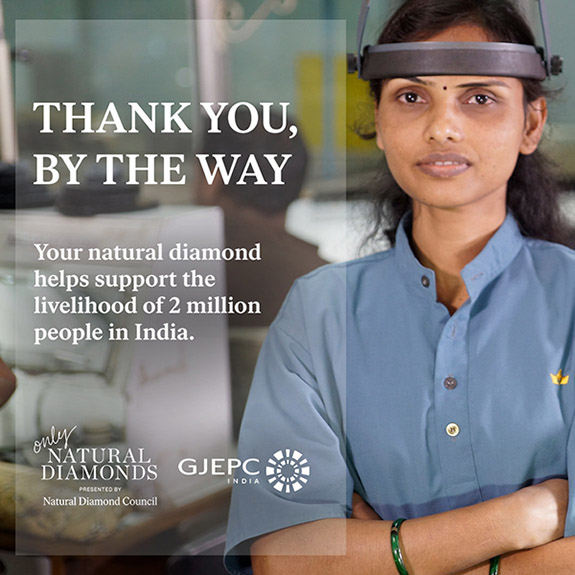 The campaign addressed the concerns of jewelry consumers who, now more than ever, want to know where their products come from, and the impact their purchases have on the producing countries and local communities.

Created with the support of the Responsible Jewellery Council (RJC), the campaign illustrated how choosing a natural diamond positively influences the lives of millions of people in the most remote corners of the earth.

In a pre-Christmas press release, the NDC announced that it will be magnifying the “Thank You, By the Way” messaging by partnering with a leading India-based trade group called the Gem Jewellery Export Promotion Council (GJEPC).

"In order to achieve long-term sustainability in our industry, we need to adapt a 360-degree approach," said Colin Shah, chairman of the GJEPC. "The association with the Natural Diamond Council does just that, by highlighting the contributions made and recognizing the vital role of the trade in bringing the community together, touching lives and making a real difference. The sector has always taken a 'do good' approach and we will continue to do so in the future."

The GJEPC has spearheaded a number of philanthropic initiatives, including aid to orphanages, schools, old age homes, hospitals and other similar causes in India and around the world. What's more, the natural diamond sector helps 2 million Indians secure their livelihoods.

NDC's omnichannel ad campaign is built around a core of critical facts related to the socioeconomic and community benefits of the natural diamond industry. The series of creative executions can be seen across NDC's social media channels, with a dedicated page on Only Natural Diamonds.

Here are some headlines from that page…


"Consumers are looking for purpose and want to know if the company they buy from has strong values and robust management systems that integrate sustainability at the core of their operations," said RJC executive director Iris Van der Veken. "The RJC certification gives that third-party assurance."