A Seattle adventurer now holds the American record for the world's "highest" marriage proposal — and we mean elevation. 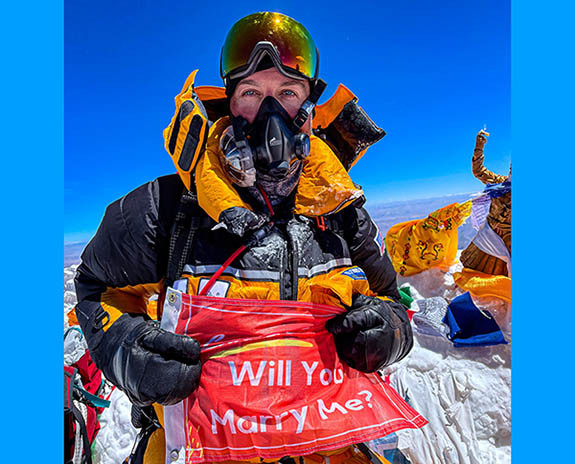 On the morning of May 23, Andrew Hughes reached the summit of Mount Everest, the tallest mountain in the world at 29,032 feet. But instead of basking in his accomplishment of having climbed all Seven Summits (the highest mountain on each of the seven continents), his focus was on a much bigger dream of declaring to his girlfriend, Lauren Beard, from atop the world that her love was his world.

In the thin air 5.5 miles above sea level, an exhausted Hughes reached into an inner pocket, dropped to his knees and unfurled a small flag that read, "Lauren, will you marry me?"

While Hughes had just set a new record for the highest known wedding proposal by any American ever — and only the second known proposal from the summit of Everest — he did not get an immediate answer. That's because Beard was not on the climbing expedition and didn't know about his intentions.

And so the Everest proposal remained a secret held alone by those on the summit. 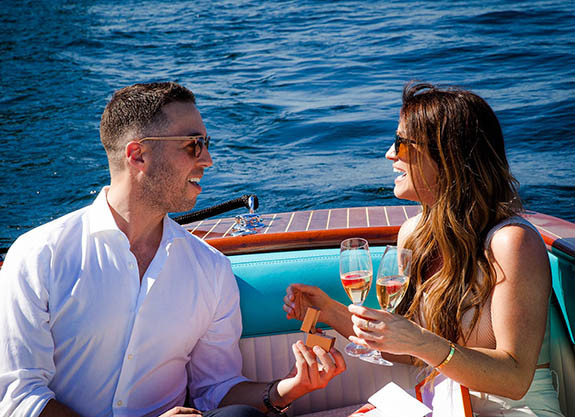 Back in Seattle on July 3, while boating across Lake Washington, Hughes presented Beard with a small box. Inside was a photo of his Everest proposal wrapped in the flag he carried to the summit.

Beard responded with a long-awaited "Yes."

The Everest expedition had taken its toll on Hughes. The adventurer had to overcome a lung infection, cold injuries and more than 20 pounds of weight loss. He and his team endured extreme conditions from cyclone weather systems and survived ice fall collapses.

"When you arrive in such summit moments in life, you also arrive at a realization that no summit is arrived at absent the love and support of all of those in one's life," said Hughes. "And that while summits are meaningful, it is those you love in your life [who] truly matter."

He said that making his girlfriend and their shared love central to the Everest moment was the most important part of reaching the summit.

In addition to conquering the Seven Summits, Hughes established a unique record on Antarctica. In 2020, he became the first American man and third person ever to complete the Antarctica Trifecta by consecutively "Skiing the Last Degree to the South Pole" and reaching the summits of Mount Vinson (Antarctica's highest mountain) and Mount Sidley (its highest volcano).