Music Friday: 'There's a Lady Who's Sure All That Glitters Is Gold' in 'Stairway to Heaven' August 12, 2022

Welcome to Music Friday when we bring you classic songs with jewelry, gemstones or precious metals in the lyrics or title. Today, we present Heart’s amazing rendition of what is arguably one of the greatest rock songs of all time, Led Zeppelin’s “Stairway to Heaven.” 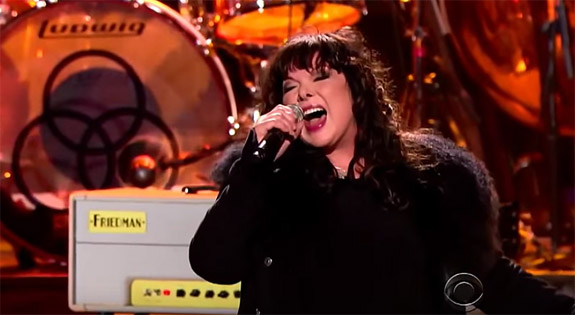 Co-writer and lead vocalist Robert Plant revealed in Led Zeppelin: The Biography that the gilded lyrics came to him in a flash of inspiration.

“I was holding a pencil and paper, and for some reason I was in a very bad mood," he said. "Then all of a sudden my hand was writing out the words, ‘There’s a lady who’s sure all that glitters is gold / And she’s buying a stairway to heaven.’ I just sat there and looked at the words and then I almost leapt out of my seat.”

Plant explained that the story is about a woman who gets everything she wants without giving anything back. She accumulates great wealth, only to find out her life has no meaning and that her money won’t get her into heaven.

Despite that basic premise, the song is filled with thought-provoking metaphors, allusions and mystical references.

“Depending on what day it is, I still interpret the song a different way — and I wrote the lyrics,” Plant said, according to songfacts.com.

Released in 1971 as the fourth track of Led Zeppelin IV, “Stairway to Heaven” became the group’s signature song. Amazingly, it was the most requested song on FM radio stations in the US in the 1970s even through the original version ran 8:02 and was never released as a single.

DJs played promotional singles, which quickly became collector’s items. In 2000, VH1 selected “Stairway to Heaven” #3 on its list of the 100 Greatest Rock Songs of all time.

Led Zeppelin, which is widely considered one of the most successful and influential rock groups in history, disbanded shortly after the death of drummer John Bonham in 1980. 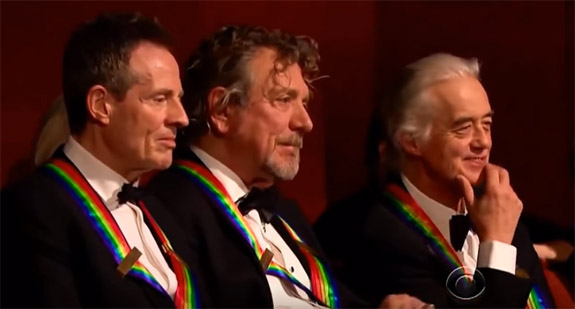 In December 2012, Led Zeppelin’s legacy was the focus of a star-studded tribute at the Kennedy Center in Washington, DC. Surviving members Robert Plant, Jimmy Page and John Paul Jones watched from the balcony with great pride as Ann and Nancy Wilson of Heart — supported by a full orchestra and powerful choir — brought down the house with an inspired performance of “Stairway to Heaven.”

The video of the performance earned more than 86 million views on YouTube.

Playing the drums was Jason Bonham, who looked strikingly like his dad, John, and is a fabulous talent in his own right. Plant is clearly misty eyed as the song builds to a rousing crescendo.

It’s an amazing moment in rock history, and we have a great video to share. We know you will love Heart’s brilliant rendition of “Stairway to Heaven,” which was broadcast on CBS. The lyrics are below if you’d like to sing along…

Ooh, it makes me wonder

Your head is humming and it won’t go
In case you don’t know
The piper’s calling you to join him
Dear lady, can you hear the wind blow
And did you know
Your stairway lies on the whispering wind

And she’s buying the stairway to heaven