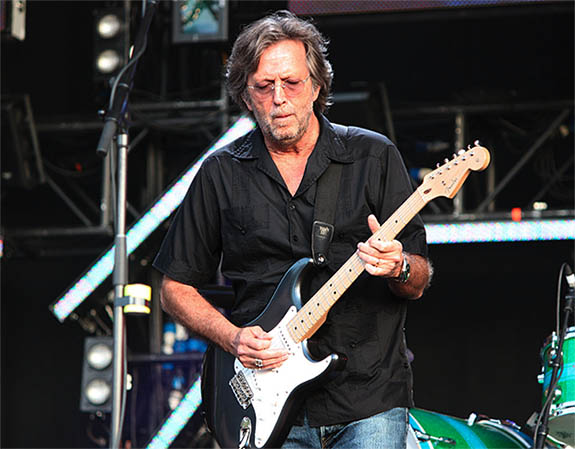 When asked by VH1 in 1999 to name his favorite song from his own catalog, the 17-time Grammy winner surprisingly picked “Golden Ring,” the ninth track on his 1978 Backless album.

He said the simple song was his all-time favorite because “it’s obscure, people don’t know it and it’s about marriage.”

It was later revealed that Clapton wrote the song to send a not-so-subtle message to Boyd about her lingering feelings for the ex-husband, Harrison. The Fab Four guitarist and Clapton became close friends in the late 1960s, but despite their friendship, Clapton fell in love with Boyd, who Harrison had married in 1966.

In 1970, Clapton reportedly proclaimed his love for Boyd with his hit song, “Layla.” When Boyd rebuffed his advances, Clapton went into a self-imposed musical exile that would last more than three years.

Boyd and Harrison eventually separated in 1974 and divorced in 1977. Clapton now had his chance to rekindle the relationship.

Clapton penned “Golden Ring” in the emotional transition year between Boyd’s official divorce from Harrison and his own marriage to Boyd in 1979. It was also the year Harrison tied the knot with author Olivia Trinidad Arias.

Clapton explained in his 2007 autobiography, “[Golden Ring] was written about the situation between me, [Pattie] and George. It referred in part to her response to the news that George was getting married again. She took it quite hard, and I, in my arrogance, found that hard to understand. So I wrote this song about the peculiarity of our triangle, which finishes with the words, ‘If I gave to you a golden ring / Would I make you happy, would I make you sing?'”

Clapton, who is the only three-time inductee to the Rock and Roll Hall of Fame (once as a solo artist, and separately as a member of the Yardbirds and Cream), is considered one of the most influential guitarists of all time, ranking second on Rolling Stone magazine’s all-time list.

Clapton has sold more than 100 million albums and played 3,000-plus concerts during his 58 years as a performing artist. Over that time, more than two billion people in 58 countries across six continents have attended his concerts.

Born Eric Patrick Clapton in Surrey, England, in 1945, to a Canadian soldier stationed in England and a teenage mom, the future guitarist was raised by his maternal grandparents, convinced that his mother was his sister. At age nine, he learned learned the truth. Emotionally scarred, he became moody and distant and stopped applying himself at school.

Clapton loved music and got his first guitar on his 13th birthday. In 1961, at age 16, Clapton attended the Kingston College of Art and studied stained-glass design. He was expelled from college after one year because he spent most of his waking hours playing guitar and listening to the blues.

According to Clapton’s official bio, he spent his early days in music as a street performer. When he was 17, Clapton joined his first band, The Roosters. To make ends meet, the young Clapton worked as a laborer alongside his grandfather, a master bricklayer.

Clapton, who was making a name for himself on the R&B pub circuit, was recruited to become a member of The Yardbirds. The 18-year-old guitarist, who would earn the nickname Slowhand even though his hands were blazing fast, accepted the offer and the rest is history.

We invite you to enjoy the audio track of Clapton performing “Golden Ring.” The lyrics are below if you’d like to sing along…

He gave to you a golden ring
It made you happy, it made you sing
And I played for you on my guitar
It didn't last long, we didn't go far

And though the times have changed, we're rearranged
Will the ties that bind remain the same?

And though the times have changed, we're rearranged
Will the ties that bind remain the same?

Well I know that I have been here before
I've trod on your wings, I've opened the door
If I gave to you a golden ring
Would I make you happy, would I make you sing?