Welcome to Music Friday when we bring you awesome songs with jewelry, gemstones or precious metals in the title or lyrics. Today, rock legend Eric Clapton sings of lessons learned in his 2010 release, “Diamonds Made From Rain.” 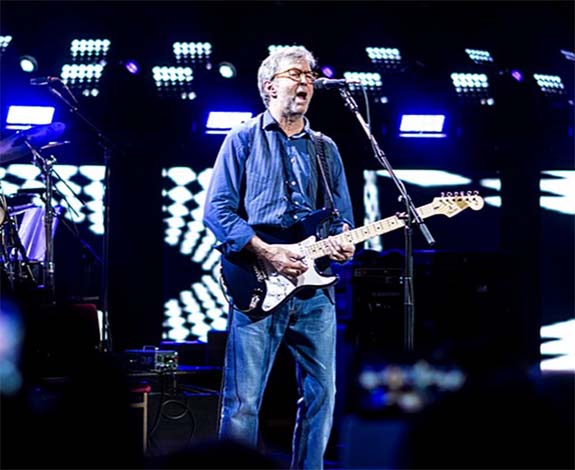 in this bluesy track from his self-titled studio album, Clapton uses both diamond and pearl metaphors to tell the story of an older man who looks back on an imperfect life — humbly acknowledging the mistakes he's made along the way and accepting responsibility.

Clapton has learned from those mistakes and he feels those life experiences have made him a better person.

Clapton sings, “That everything is shown to me / I let it wash over me / Like diamonds made of rain / You can find joy inside the pain.”

Later he adds, “Everything that I've endured / For the wisdom of a pearl / I wouldn't change a thing / You can make diamonds from the rain."

Clapton invited his former love interest, Sheryl Crow, to sing harmonies on “Diamonds Made From Rain.” The pair reportedly had a brief relationship in the late 1990s and it was rumored that her song, “My Favorite Mistake,” is about him. Crow has denied that the song was about Clapton and said the relationship was not a mistake.

Clapton has sold more than 100 million albums and played 3,000-plus concerts during his 57 years as a performing artist. Over that time, more than two billion people in 58 countries across six continents have attended his concerts.

Ranked second on Rolling Stone magazine’s list of the “100 Greatest Guitarists of All Time,” the 74-year-old Clapton is the only three-time inductee to the Rock and Roll Hall of Fame — once as a solo artist, and separately as a member of the Yardbirds and Cream.

Born Eric Patrick Clapton in Surrey, England, in 1945, to a Canadian soldier stationed in England and a teenage mom, the future guitarist was raised by his maternal grandparents, convinced that his mother was his sister. At age nine, he learned that his "sister" was really his mom. Emotionally scarred, he became moody and distant and stopped applying himself at school.

Clapton loved music and got his first guitar on his 13th birthday. In 1961, at age 16, Clapton attended the Kingston College of Art and studied stained-glass design. He was expelled from college after one year because he spent most of his waking hours playing guitar and listening to the blues.

According to Clapton's official bio, he spent his early days in music as a street performer. When he was 17, Clapton joined his first band, The Roosters. To make ends meet, the young Clapton worked as a laborer alongside his grandfather, a master bricklayer. Clapton, who was making a name for himself on the R&B pub circuit, was recruited to become a member of The Yardbirds. The 18-year-old guitarist, who would earn the nickname Slowhand even though his hands were blazing fast, accepted the offer and the rest is history.

We invite you to enjoy the audio track of Clapton performing “Diamonds Made From Rain” at the end of this post. The lyrics are below if you’d like to sing along...

If the promises are kept
I'll waive all of my regrets
I can say I've overcome
With you, my heart is open