For the past 27 years, a succession of golden retrievers — each playing the role of "Jake The Diamond Dog" — have delighted minor league baseball fans from coast to coast. Just recently, however, Jake's brilliant and adorable on-field antics have caught the attention of huge media outlets and made him an instant celebrity. 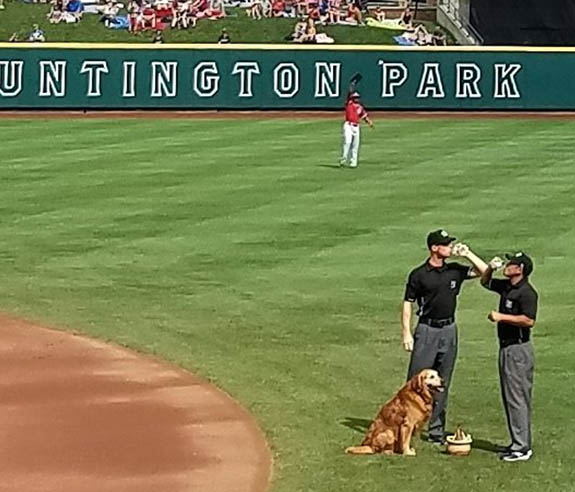 The current Jake, whose real name is Deuce, took over the role in 2009. The handsome, well tempered pooch is often called "the best darn dog in professional baseball." 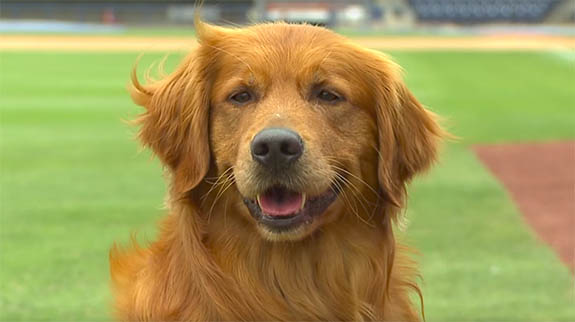 If you've been to a minor league contest featuring the Fort Wayne TinCaps, South Bend Cubs, Louisville Bats or Columbus Clippers over the past quarter century there is a good chance that you've already seen one of the Jakes in action. 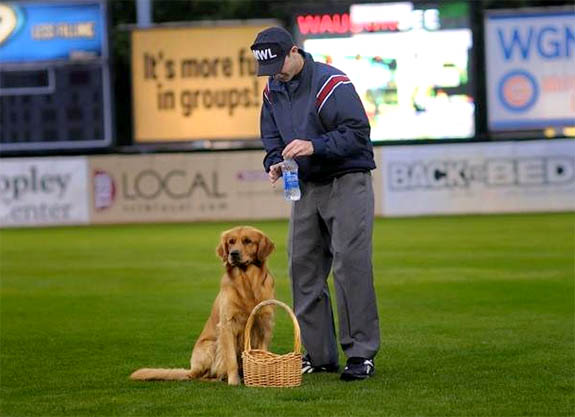 The current iteration of Jake delights the crowd by taking water bottles out to the umpires in a little straw basket. The pup waits patiently while the umpire rehydrates and returns the empty bottle. The dog is also responsible for taking the game ball to the pitcher before the start of the contest, standing by the pitcher during the National Anthem, shagging foul balls, picking up stray bats and catching Frisbees between innings. 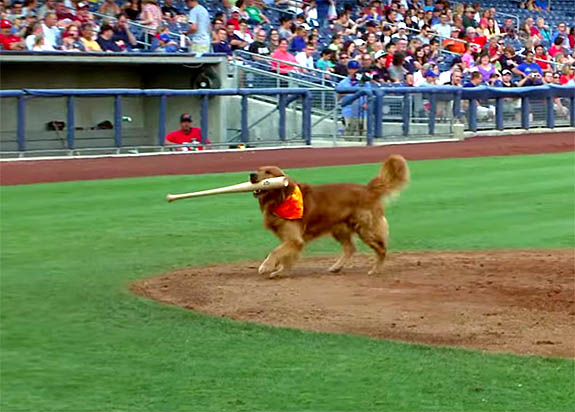 Before the game, fans will often see Jake The Diamond Dog meeting and greeting fans as they enter the ballpark. Pre-game activities also include searching the stands for that day's "Ballpark Sweetheart," who is typically a little red-headed girl with Jake's colorations. During the game, the Sweetheart is introduced to the crowd and Jake brings her a bouquet of flowers.

Adorable pups doing adorable things have become a staple of social media, and Jake The Diamond Dog is riding a wave of popularity. Just recently, he's caught the attention of Inside Edition, People Magazine, the Washington Post and the BBC. Jake also has become a darling of social media, including Facebook, Instagram and Twitter.

Jake The Diamond Dog has his own Facebook page, and this is where upcoming appearances are promoted. The Events section outlines three upcoming ballgames in Ft. Wayne (Aug. 1), Louisville (Aug. 20) and Columbus (Aug. 21). 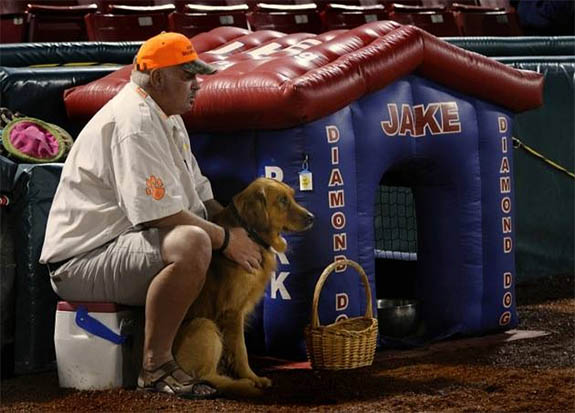 When he's not performing during the game, Jake keeps out of harm's way by resting in an inflatable dog house on the first base line.

The original Jake The Diamond Dog was trained by Jeff "Dog Man" Marchal in 1990. That dog, whose real name was Jericho, caught the attention of Mike Veeck, who specialized in minor league promotions. Veeck was impressed when he witnessed Jericho delivering items curb-side at a drive-thru farm store, and then taking the customer's money and bringing it back to Marchal. Veeck wondered if Marchal could train the dog to bring water bottles to the umpires. Clearly the answer was yes, and the rest is history.

Marchal believes that Deuce loves his role as Jake The Diamond Dog.

"The dog does a great job and we share a lot of stories with the fans,” he told Inside Edition. “His tail's always wagging. I think he enjoys it a whole lot.”

Deuce is the fourth golden retriever to portray Jake The Diamond Dog. Marchal told Inside Edition that he's getting so many calls for bookings that he may consider training a new "Diamond Dog" in the near future.

Check out the video of Jake The Diamond Dog doing what he does best...


Credits: Top image via Instagram/MelissaBooker. Other images via Facebook/Jake The Diamond Dog.