"The Jewelled Phoenix," a remarkable three-dimensional gold coin hand set with 89 ultra-rare pink diamonds, was unveiled last week by mining company Rio Tinto and The Perth Mint at the 47th World Money Fair in Berlin. The delicately sculpted two-tone coin carries a price tag of $147,835 and will have a limited mintage of eight pieces. 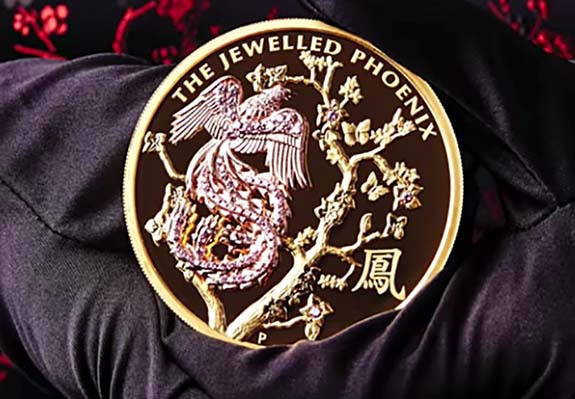 “Inspired by ancient Chinese legend, the fine detail and artistry of The Jewelled Phoenix has taken our craftsmanship to the next level,” said Perth Mint chief executive officer Richard Hayes. 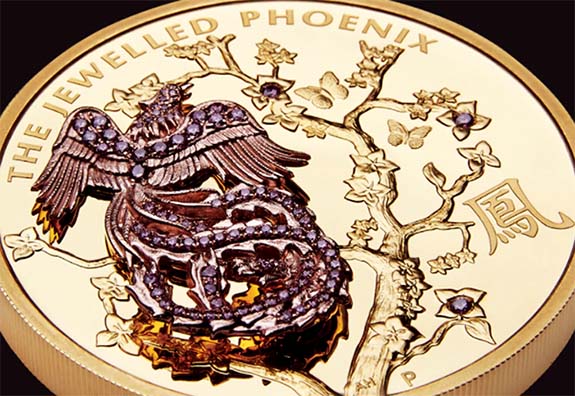 Embellished with plumage rendered in pink and purplish-pink diamonds, the 18-karat rose gold phoenix appears to be landing on the fabled paulownia tree, which has three of its flowers hand set with pink diamonds. Each coin will showcase 1.22 carats of colored diamonds sourced from Rio Tinto’s Argyle Diamond Mine in the East Kimberley region of Western Australia. 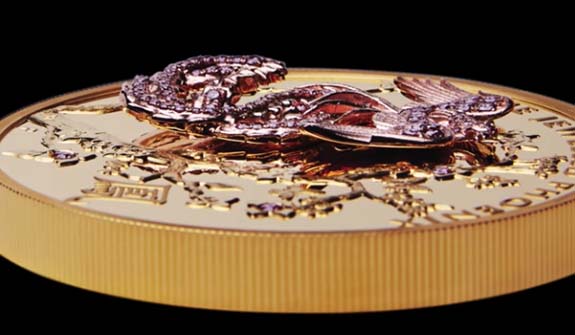 Each coin measures 60.6mm (2.39 inches) in diameter and contains more than 10 troy ounces of 99.99 fineness yellow gold and .45 troy ounces of 18-karat rose gold. The extraordinary three-dimensional rendering of the phoenix brings the thickness of the coin to 12.8mm (0.5 inches).

The phoenix is a mystical bird associated with ancient Greek and Asian cultures. The mystical Chinese phoenix is a symbol of happiness and prosperity.

The paulownia tree also has a special place in Chinese culture. An old custom was to plant a paulownia tree (also known as the "princess or empress tree") when a girl was born. The fast-growing tree matured quickly, so when the girl was ready to marry, the tree was cut down and carved into wooden articles for her dowry.

Legend also states that the phoenix will land only on the empress tree — and only when a good ruler is in power. The mintage of eight coins is also significant, because the number eight is considered extremely lucky in Chinese culture.