On Monday, August 21, skygazers from Salem, Ore., to Charleston, S.C., will see a rare total solar eclipse and — for just a brief moment — a fantastical celestial display that looks remarkably like a diamond ring. 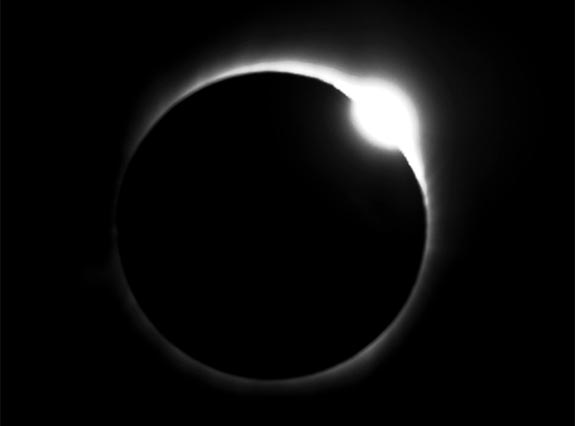 The "Diamond Ring Effect," which was first explained by Francis Baily in 1836, occurs when the moon completely masks out the sun during a total solar eclipse. Due to the rugged lunar landscape, the black outline of the moon is not smooth. Tiny beads of sunlight can still shine through in some places and not in others as the moon slowly grazes past the sun.

These are called Baily’s Beads. When only one dazzling “bead” remains, momentarily, the view of the eclipse resembles a diamond ring. The ring’s glow is produced by the sun’s corona remaining dimly visible around the lunar silhouette.

The Diamond Ring Effect will actually happen twice on August 21. The first time will occur in the moment just before the total eclipse, and the second will occur just after the total eclipse. The so-called Great American Solar Eclipse will last about 2 minutes and 40 seconds, and effectively turn day into night.

NASA warned that skywatchers should NEVER look at a partial solar eclipse without proper eye protection. Looking directly at the sun, even when it is partially covered by the moon, can cause serious eye damage or blindness. Only during totality, when the sun's disk is completely covered by the moon, is it safe to view the eclipse with the naked eye, says NASA. Learn more about solar eclipse eye protection at Space.com.