Couples Spending More Than Ever on Super-Personalized Weddings, Reports The Knot February 27, 2019

The Knot's 12th annual "Real Weddings Study" paints a picture of a new generation of couples who are willing to break with tired traditions and invest, instead, in super-personalized events infused with meaningful details. Their goal is for guests to leave the celebration saying, “That was so them.” 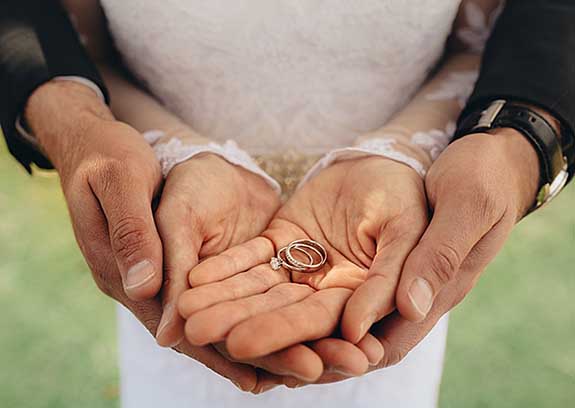 The Knot reports that bridal couples are pulling out all the stops to make sure their loved ones have an absolute blast: The average couple hosts 136 guests, and the average spent per guest is $258. Besides the expected food, drink and music, 38% of couples hire above-and-beyond reception entertainment. The Knot's survey respondents listed live tattoo artists, cigar-rolling stations and craft margarita bars among the outside-the-box attractions.

The engagement ring — at $5,680 — remained the second-highest-priced item on the list of all wedding expenses (the venue was #1). The average price for an engagement ring in 2018 was slightly down from the previous year's total of $5,764. The Knot noted, however, that a sub-group of “high spenders” (those whose weddings cost more than $60,000) spent an average of $13,619 on their engagement rings.

"Weddings in 2018 showcased more personality and attention to detail than ever before," noted Kristen Maxwell Cooper, editor in chief of The Knot. "Couples are rethinking conventional traditions and putting their own creative spins on long-standing wedding moments, like unity ceremonies and first dances. Some couples are opting to embrace their cultural heritage, while others choose to pay homage to pop culture that plays a part in their shared story. Each wedding is a love story worth celebrating, and every detail is an opportunity to infuse personal style and sentiment."

According to The Knot, how couples signify their unity is evolving. In addition to using traditional sand or candles, couples are embracing their personal history and cultural heritage in new ways—through unity ceremonies that mix up guacamole recipes from their grandparents, blending whiskeys from locales close to their heart, or honoring a long-standing cultural unity tradition like Celtic Handfasting, where the couples commit to each other by having their hands tied together with a braid.

Four in five (80%) couples report having set a wedding budget. Nearly half (45%) admitted to going over their planned budget and only 6% said they stayed under budget. In 2018, 91% of couples contributed to their overall wedding costs, with 9% of those couples paying for their wedding entirely on their own.