Christie's Auction of 100-Plus-Carat, D-Flawless Diamond Promises to Be a 'Spectacle' April 27, 2021

On May 12, Christie's Geneva will place on the auction block a 100.94-carat, D-flawless diamond that's expected to yield between $12 million and $18 million. 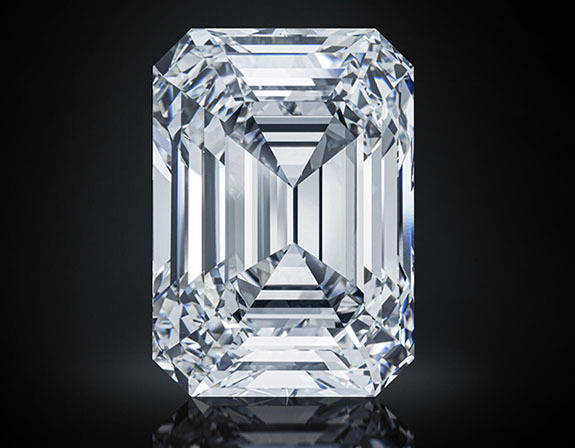 Aptly named "The Spectacle," the featured lot of Christie's Magnificent Jewels auction was cut from a 207.29-carat rough stone that measured 38.0 х 37.0 х 18.0 mm and displayed a slightly grooved surface.

The stone was sourced in 2016 at the Zarnitsa kimberlite pipe in the Sakha Republic (Yakutia) in the northeast of Russia. Zarnitsa is Russia's first-ever diamond deposit. The find was made in 1954, but not actively mined until 1999.

The “Diamonds of Alrosa” cutting factory in Moscow transformed the rough diamond into its current shape during an arduous, high-stakes process that took 20 months to complete. The emerald cut is incompatible with any imperfections, as its broad, stepped facets allow the observer to gaze endlessly into the clear, unobstructed depths of the gem. In jewelry circles, the emerald cut is also know as "the most unforgiving cut." The end result has to be perfect.

The 100.94-carat Spectacle is the largest diamond ever to have been cut in Russia and compares favorably with similar high-profile diamonds that have gone under the hammer at Christie's Geneva. The first is the 101.73-carat, D-flawless Winston Legacy, which sold for $26.7 million in 2013, and the second is the 163-carat, D-flawless Creation I, which sold for $33.7 million in 2017.

“We are fascinated to present this long-awaited gem," said Sergey Ivanov, CEO of Alrosa. "…this exceptional 100.94-carat, colorless, emerald-cut diamond displays a breathtaking performance, which is a natural wonder revealed by human hand."

The Alrosa CEO called The Spectacle a unique occurrence due to its astonishing size, flawless provenance and impeccable color.

The Spectacle will be available for public viewing from May 1-2 in Taipei and from May 8-12 in Geneva. The sale will take place at Geneva's Four Seasons Hotel des Bergues.