With his hands sweating and his heart thumping, Seth Dixon became an accidental media star early this week when he fumbled a diamond engagement ring through the planks of a wooden footbridge in Kansas City. The 26-second video of a marriage proposal gone horribly wrong has caught the attention of major media outlets from coast to coast and around the globe. 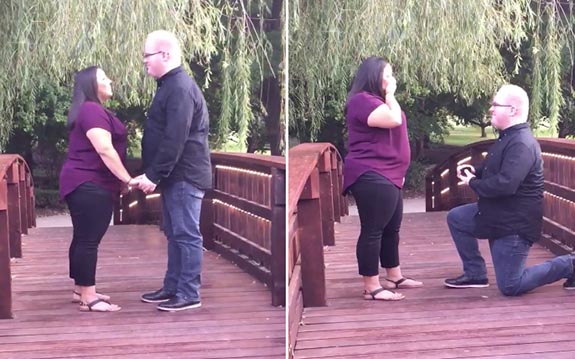 The Kansas City resident had planned to surprise his girlfriend, Ruth Marie Salas, by popping the question on Saturday at picturesque Loose Park.

"I knew I wanted to propose [at Loose Park] just because it's kind of our spot," Dixon told local television station KSHB. "We just kind of fell in love with the park and the beauty of it." 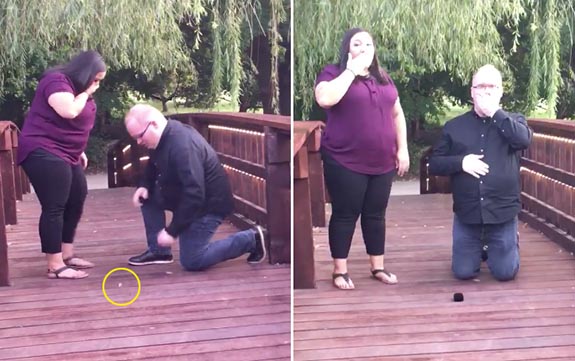 With a friend documenting the momentous event on her cell phone, Dixon went down on one knee at the crest of the bridge. The anxious suitor popped open the black ring box, but couldn't keep a grip on the engagement ring. Dixon and Salas looked on in disbelief as the $4,000 diamond ring bounced twice on the bridge, disappeared through a gap between the boards and splashed into the pond below. Circled in the photo, above, is the ring just before it falls through the bridge.

"It ping-ponged through the crack and I hear it plop in the water," Salas told KSHB. "I didn't know what else to think but, 'Oh my goodness.'"

Dixon, Salas and the friend made an attempt to rescue the ring, but the poor visibility and deep silt made the search very difficult.

They returned Sunday morning with a metal detector enthusiast, who came up empty because the water was too deep. 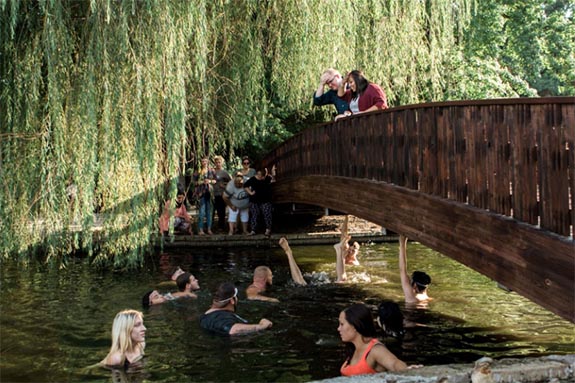 At 11 a.m. the couple attended a church service and told the congregants from Lifegate Church in Independence about their plight. By 3 p.m., more than 25 friends from the church had donned goggles and swimming gear to join in the search. Fellow parishioner and professional wedding photographer Staci Dabney captured the water-bound excitement on Sunday. 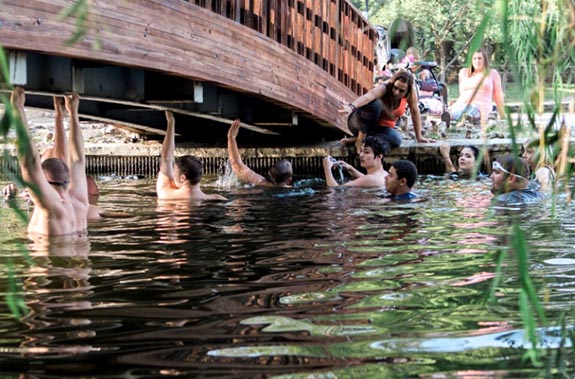 Despite the outpouring of love and support from the community, the ring could not be found.

On Monday, a GoFundMe page was established on behalf of the couple. The funds were earmarked for a replacement ring, but by Tuesday afternoon, the campaign was marked completed after only $261 had been raised. It looks as if the viral video will be generating enough cash for the couple to purchase a new ring. Major media outlets will be paying a fee to use the video. As of today, the video was still available to view on the Facebook page of Staci Dabney's Photography. Click this link.

The internet stars, who had been dating for four years, plan to wed October 21.