Birthstone of the Month: This Fiery Red Gem Is a Super-Rare Variety of Imperial Topaz November 10, 2021

A stunning member of the Smithsonian's National Gem Collection for the past three years, the impossibly rare "Whitney Flame Topaz" is one of the world's most extraordinary examples of November's official birthstone. 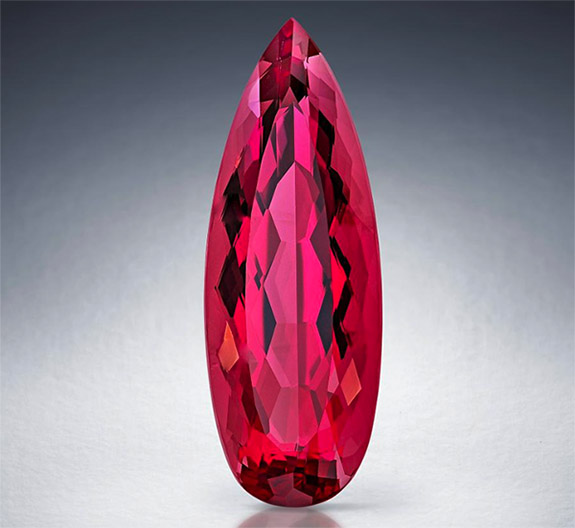 The vibrant red gem weighs 48.86 carats and exhibits an exaggerated pear-shape that resembles a flame. At the Janet Annenberg Hooker Hall of Geology, Gems, and Minerals in Washington, DC, the gem is mounted vertically and lit from behind to emphasize its fiery color.

Red topaz represents an extremely tiny subset of gem-quality Imperial Topaz, which is highly coveted and most often seen in golden-orange to orange-red hues. Shades of pink, purple, and red are even more rare. The red color is the result of trace amounts of chromium in the gemstone’s chemical composition.

The Whitney Flame was sourced more than 50 years ago at the famed Capao Mine mine of Ouro Preto, Brazil.

“Of all the topaz found in that locality, only about a percent or two is gem quality,” Jeffrey Post, curator of the National Gem and Mineral Collection, told Smithsonian.com in 2018. “And, of those one to two percent, maybe one percent of those have a deep enough red color that they could be marketed as red topaz.”

The flame-shaped red topaz was held privately for many decades, before emerging at the annual Tucson Gem and Mineral Show in 2017. Post and Smithsonian benefactor Coralyn Wright Whitney were moved to tears when they viewed the stone for the first time.

“When we saw it, we all collectively started weeping a little bit,” Post said. “The color and beauty of this gemstone is astounding. You have to see it to believe it.”

Whitney acquired the stone and gifted it to the Smithsonian, along with a $5 million endowment.

In September of 2018, the Smithsonian welcomed the red gem as a permanent resident of the National Museum of Natural History and honored the philanthropist by naming it the"Whitney Flame Topaz."

Brazil is the largest producer of quality topaz, but the stone is also mined in Pakistan, India, Sri Lanka, Russia, Australia, Nigeria, Germany, Mexico and the U.S (specifically California, Utah and New Hampshire). Topaz rates an 8 on the Mohs hardness scale, making it a durable and wearable gem.