One of the world’s most outstanding examples of February’s birthstone is the 96-carat heart-shaped stunner at the center of the "Amethyst Heart Brooch," an Edwardian-period piece that was donated to the Smithsonian in 1973 by philanthropist Miriam Hubbard Morris. 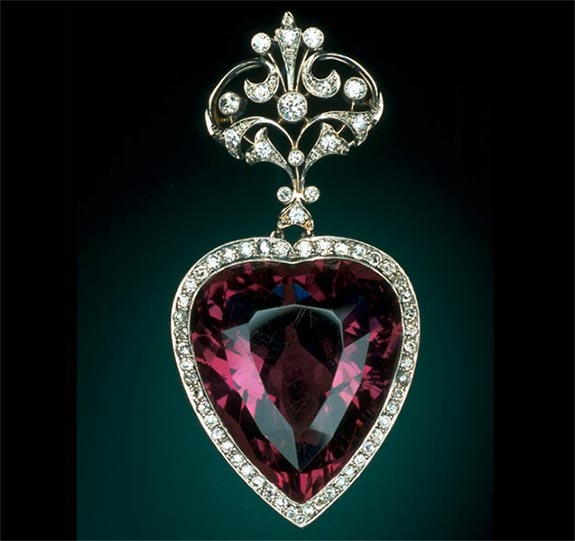 Exhibiting a deep, rich purple color, the Brazilian-sourced amethyst is surrounded by diamonds in a mounting that is fabricated in platinum with a yellow gold undercarriage. The brooch has a filigree top that imitates the heart shape with pierced work, incorporating a fleur-de-lis motif set with old European cut diamonds.

According to the Smithsonian, the brooch was likely crafted between 1901 and 1915, when jewelry of the time featured lacy filigree designs that were light and delicate like the clothing at the time, with a sense of refined elegance and luxury.

Interestingly, amethyst was often included in jewelry of this era because it was a favorite stone of Alexandra, the wife of British King Edward VII, who passed away in 1910. Edward's mother was Queen Victoria, whose refined tastes were reflected in the Victorian era.

For the past 48 years, her generous donation of the "Amethyst Heart Brooch" has been a permanent resident of the National Gem Collection at the National Museum of Natural History in Washington, D.C.

Amethyst is the most coveted variety of quartz, which is clear in its pure state. Amethyst owes its purple color to a few atoms of iron displacing some of the silicon in the gem’s molecular structure. These traces of iron can give amethyst a wide range of colors, from almost white to deep purple.

Amethyst has been treasured for thousands of years and is one of the oldest recorded gemstones. Amethysts have been recovered from ancient Egyptian tombs and were prized by the Greeks, Romans, Babylonians and Hebrews.

The ancient Greeks believed amethyst could reverse the effects of drunkenness. In fact, amethyst gets its name from the Greek word “amethystos,” which literally means “not to intoxicate.”

The color rating of an amethyst is determined by hue, tone and saturation. Hue is the color; tone is relative lightness or darkness of the color; and saturation relates to the color’s intensity, from dull to vivid.