Bended-Knee Proposals Can Trace Their Origins to the Knights of the Middle Ages September 13, 2022

There are few things more "Awww" inspiring than witnessing the exact moment when couples young and old commit their lives to each other. And nearly every proposal we see in person or posted to social media includes that awkward scene where one partner gets down on bended knee and fumbles with a ring box while the other catches a first glimpse of a new bauble and hopefully answers "Yes" to the question "Will you marry me?" 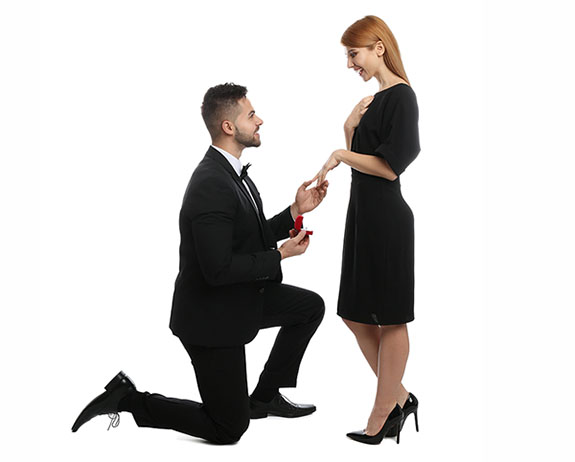 The vast majority of proposals today are of the bended-knee variety, but did you ever wonder where and when that tradition originated?

Our expression of chivalry can trace its roots to the Middle Ages, when knights humbly bowed before noblewoman because kneeling was an act of respect, admiration and loyalty.

And for hundreds of years, the act of genuflection — bending a knee to the ground— has been tied to the church, where it is seen as a gesture of honor or worship.

In modern times, getting down on one knee symbolizes a humble willingness to commit one's life to another. It's a physical demonstration of propping up one's significant other into a superior position and offering oneself, both heart and soul, without reservations. It is the partner's choice whether or not to accept the proposal.

In The Knot’s 2019 Jewelry and Engagement Study, 84% of proposers reported that they went down on bended knee before proposing to their significant other.

The survey also revealed the prevalence of other enduring traditions. Nearly 90% asked their partner to marry them with a ring in hand, 87% said the words “will you marry me,” and 71% sought their partner’s parents' permission before proposing.

The website lovetoknow.com also cleverly pointed out that "a practical reason behind a bent-knee proposal is that it puts the engagement ring in an elevated position between the couple, letting the light hit it clearly without being blocked by both individuals."