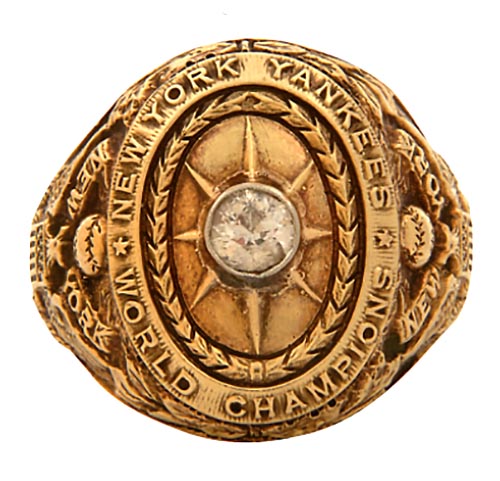 ESPN.com reported that the Ruth ring set a new auction record for the highest price ever paid for a sports ring, more than quadrupling the previous record held by Julius Erving's ABA championship ring, which sold for $460,741 in 2011. 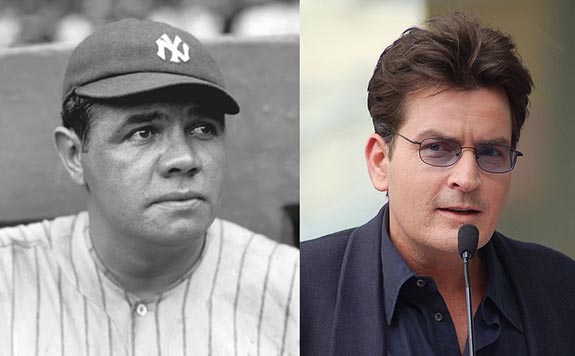 Actor Charlie Sheen put Ruth's ring up for bid, along with an original copy of the sale document that sent Ruth from the Boston Red Sox to the New York Yankees. That document, which is considered the most important document in sports history, was sold for a winning bid of $2.3 million.

The 14-karat gold World Series ring features a slightly chipped bezel-set round diamond stylized as a sun with rays radiating from the center. Framing the diamond is a decorative array of arrow feathers and the title "New York Yankees World Champions." The inscription "G. H. Ruth" can be clearly seen on the inside of the band. G.H. stands for George Herman.

Both the left and right sides of the ring display an American eagle with its wings spread. Above the eagle's head is a baseball and following the contours of the wings are the words "New York." Below the eagle is the year 1927.

Bohemia, N.Y.-based Lelands.com reported that the ring had been obtained from Babe Ruth's widow, Claire Ruth, in the 1970s by baseball collector Barry Halper. Sheen purchased both the ring and sale document from Josh Evans of Lelands for an undisclosed sum in the early 1990s.
"I've enjoyed these incredible items for more than two decades and the time has come," Sheen told ESPN. "Whatever price it brings is gravy."

Babe Ruth's 1927 World Series ring commemorated an epic season during which he hit a then-record-breaking 60 homes runs, batted .356 and drove in 164 runs. He was on a Yankees team that won 110 games. The team's legendary "Murderers' Row" was a lineup of powerful hitters that included seven future Hall of Famers. The team would go on to sweep the Pittsburgh Pirates in the World Series.

The highest price ever paid for a sports memorabilia item was a 1920 Babe Ruth game jersey that sold for $4.5 million in 2012.