Ancient Amethyst Ring Unearthed in Israel May Have Been Worn to Ward Off Drunkenness November 17, 2021

When an amethyst ring dating back 1,500 years was unearthed in Yavne, Israel, near the site of the largest winery of the Byzantine period (330-1453 AD), archaeologists with the Israel Antiquities Authority were quick to point out the obvious connection. 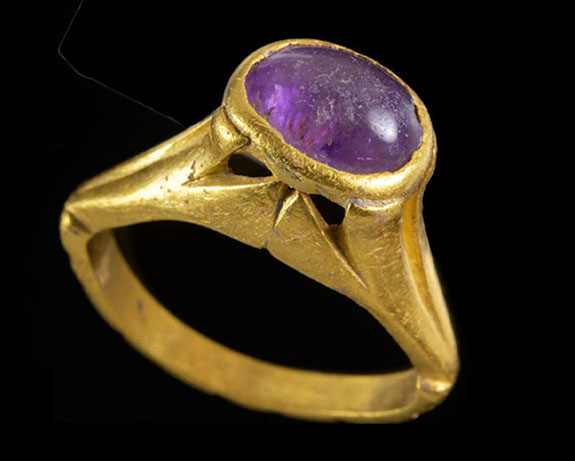 You see, in ancient times it was believed that amethyst jewelry could protect its wearer from intoxication and ward off the effects of a hangover. The word "amethyst," in fact, comes from the Greek word "amethystos," which literally means "not drunken."

"Did the person who wore the ring want to avoid intoxication due to drinking a lot of wine?" asked Dr. Elie Haddad, the director of the excavation on behalf of the Israel Antiquities Authority. "We probably will never know."

The director noted that the ring was found just 150 meters from the remains of a long warehouse, which was used to store tall wine jars, called "amphorae." These jars had long, narrow necks and handles on each side.

Weighing 5.11 grams, the gold ring is bezel set with a cabochon cut amethyst. Despite being buried for more than 1,500 years, the ring and the stone are in remarkably good shape.

The popularity of amethyst dates back thousands of years. The pretty purple stone is mentioned in the Old Testament as one of the 12 precious stones worn by the high priest of the Temple on his ceremonial breastplate.

“The person who owned the ring was affluent, and the wearing of the jewel indicated their status and wealth,” noted Dr. Amir Golani, an expert on ancient jewelry at the Israel Antiquities Authority. “Such rings could be worn by both men and women.”

It is possible that the impressive ring belonged to the owner of the warehouse, a foreman, or simply to an unlucky merchant, who dropped it en route to the winery.

The researchers are still debating when the ring was actually fabricated. The material at the a dig site dates back to the 7th century AD, but it is possible that the ring, due to its beauty and prestige, had been handed down from generation to generation over the centuries. Gold rings inlaid with amethyst stone are known in the Roman world, and it is possible that the ring had belonged to the elites who lived in the city as early as the 3rd century AD.

“The small, everyday finds that are discovered in our excavations tell us human stories and connect us directly to the past," said Eli Eskozido, director of the Israel Antiquities Authority. “It is exciting to imagine that the man or woman to whom the ring belonged, walked right here, in a different reality to what we know in today's city of Yavne.”